Strategic Brief no.28 - 2022 - Strengthening Regional Cooperation on Environmental and Climate Security in the Southwest Indian Ocean 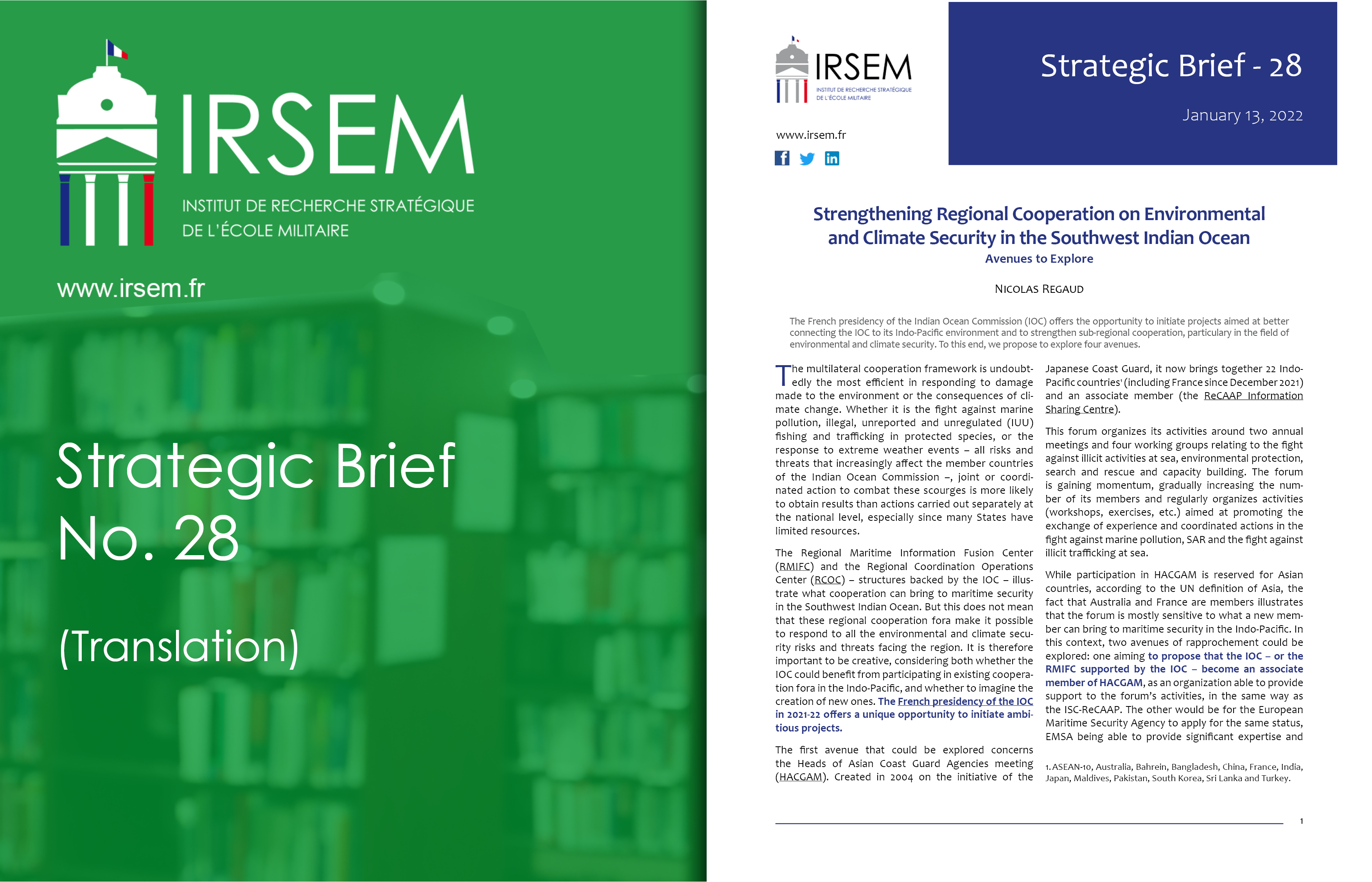 The French presidency of the Indian Ocean Commission (IOC) offers the opportunity to initiate projects aimed at better connecting the IOC to its Indo-Pacific environment and to strengthen sub-regional cooperation, particulary in the field of environmental and climate security. To this end, we propose to explore four avenues.

The multilateral cooperation framework is undoubtedly the most efficient in responding to damage made to the environment or the consequences of climate change. Whether it is the fight against marine pollution, illegal, unreported and unregulated (IUU) fishing and trafficking in protected species, or the response to extreme weather events – all risks and threats that increasingly affect the member countries of the Indian Ocean Commission –, joint or coordinated action to combat these scourges is more likely to obtain results than actions carried out separately at the national level, especially since many States have limited resources.

The Regional Maritime Information Fusion Center (RMIFC) and the Regional Coordination Operations Center (RCOC) – structures backed by the IOC – illustrate what cooperation can bring to maritime security in the Southwest Indian Ocean. But this does not mean that these regional cooperation fora make it possible to respond to all the environmental and climate security risks and threats facing the region. It is therefore important to be creative, considering both whether the IOC could benefit from participating in existing cooperation fora in the Indo-Pacific, and whether to imagine the creation of new ones. The French presidency of the IOC in 2021-22 offers a unique opportunity to initiate ambitious projects.

The first avenue that could be explored concerns the Heads of Asian Coast Guard Agencies meeting (HACGAM). Created in 2004 on the initiative of the Japanese Coast Guard, it now brings together 22 Indo-Pacific countries[1] (including France since December 2021) and an associate member (the ReCAAP Information Sharing Centre).

While participation in HACGAM is reserved for Asian countries, according to the UN definition of Asia, the fact that Australia and France are members illustrates that the forum is mostly sensitive to what a new member can bring to maritime security in the Indo-Pacific. In this context, two avenues of rapprochement could be explored: one aiming to propose that the IOC – or the RMIFC supported by the IOC – become an associate member of HACGAM, as an organization able to provide support to the forum’s activities, in the same way as the ISC-ReCAAP. The other would be for the European Maritime Security Agency to apply for the same status, EMSA being able to provide significant expertise and capabilities, especially in the fight against marine pollution with its CleanSeaNet monitoring system.

The second avenue concerns the Pacific Environmental Security Forum created at the initiative of INDOPACOM in 2012, which promotes awareness of environmental and climate security issues and the exchange of information and experiences between civil, defense and security agencies in the Indo-Pacific region. This forum brings together 25 countries from the Indo-Pacific region – including France since 2019 – understood as the geographical area of responsibility of INDOPACOM, thus excluding the Gulf and the western Indian Ocean. The PESF is being transformed to become a Partnership (PESP) and covers an extremely wide area of topics, ranging from maritime environmental security to the fight against trafficking in protected species, water security, waste management, the fight against IUU fishing and marine pollution.

IOC participation in the PESF/PESP would make sense, provided INDOPACOM accepts a member from a region outside its area of ​​responsibility. But one can think that this would not pose major difficulties, the Biden administration having realized of the need to revive an inclusive multilateralism in the Indo-Pacific (China participates in the PESF), in particular on environmental and climate issues.

With regard to new initiatives in the field of ​​regional cooperation, a first avenue is inspired by the Australian initiative to create the Pacific Fusion Center (PFC), backed by the Pacific Islands Forum. In a previous strategic brief, we have already presented the idea of ​​a possible transposition of the PFC in the Indian Ocean. The basic concept of the PFC is to collect, analyze, fuse and share relevant information and analysis to tackle the risks and threats common to the region: climate change, IUU fishing, transnational crime and drug trafficking in particular, disinformation or the fight against the Covid-19 pandemic. Since September 2019, a pilot center has been created in Canberra, which has made it possible to test and identify the limits of the fusion of open information, shared and real-time analysis of risks and threats and their dissemination for the benefit of heads of relevant government and regional agencies.

A possible transposition of the PFC in the Indian Ocean should take into account the need for it to address issues complementary to those covered by the RMIFC, such as climate security, disinformation, cybersecurity, transnational crime and health security. Like RMIFC and RCOC, this new structure could be linked to the IOC.

Such an initiative would require a feasibility study, as Australia has carried out with its partners of the Pacific Islands Forum, which could this time be carried out by the IOC’s General Secretariat, in close consultation with France, India and the EU in particular. This study should in particular specify the areas to be covered providing real added value, in order to avoid the risk of creating an instrument that is intellectually attractive but ultimately of little use or redundant with work carried out elsewhere. The European Union could be interested in this concept, as an observer member and first financial and technical partner of the IOC, and which leads and supports maritime security programs MASE and CRIMARIO, as well as the ENACT project to strengthen the fight against transnational organized crime in Africa. Such an initiative could significantly contribute to building a regional common strategic culture, at least on non-traditional security issues.

The last avenue is inspired by an African model, that of the International Academy for the Fight against Terrorism (AILCT), a project jointly sponsored by France and the Ivory Coast. This academy is based on three pillars, an inter-ministerial school for executives, a training center for African special intervention units, and a strategic research institute (IRS). It is this last pillar that could eventually be transposed to the Indian Ocean.

A Strategic Research Institute backed by the IOC and making it possible to encourage research on non-traditional security issues – in particular environmental and climate security – could usefully help to enlighten the countries of the region on the evolution of regional risks and threats, to mobilize the intellectual resources of the region through calls for projects, while a regional governance of the institute would make it possible to orient research work on subjects of direct interest to the member countries of the IOC.

This could be a means – modest but realistic – to support the many IOC Projects relating to security issues in the broad sense: those on maritime security, port security and safety at sea, food security, resilience and disaster response management or health security.

Dr. Nicolas Regaud is senior fellow at IRSEM. His work focuses on strategic issues in the Indo-Pacific and climate security.