Strategic Brief No. 7 - 2020 - A Skeptical Intervener: Germany in the Sahel 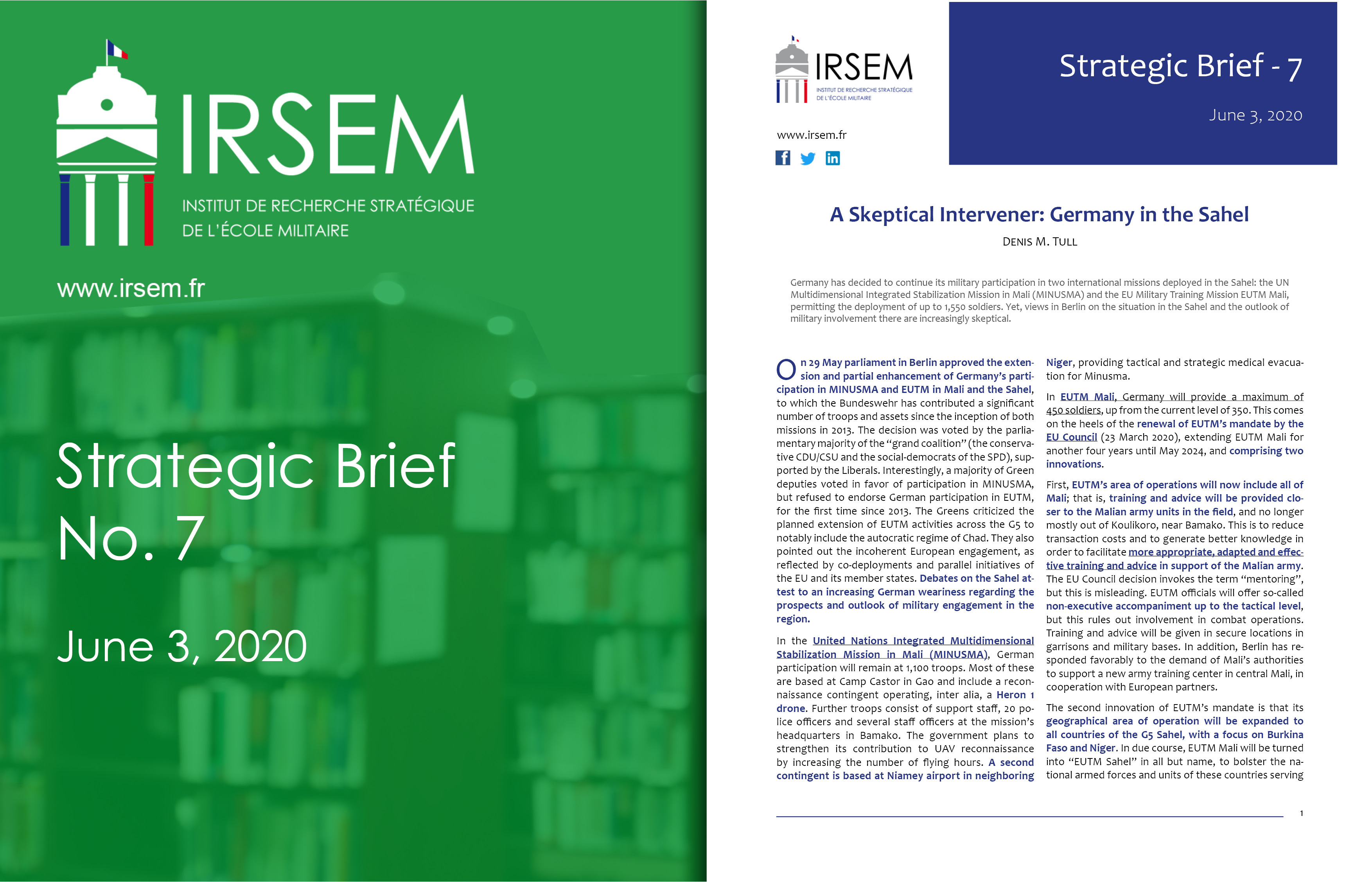 A Skeptical Intervener:
Germany in the Sahel

Germany has decided to continue its military participation in two international missions deployed in the Sahel: the UN Multidimensional Integrated Stabilization Mission in Mali (MINUSMA) and the EU Military Training Mission EUTM Mali, permitting the deployment of up to 1,550 soldiers. Yet, views in Berlin on the situation in the Sahel and the outlook of military involvement there are increasingly skeptical.

On 29 May parliament in Berlin approved the extension and partial enhancement of Germany’s participation in MINUSMA and EUTM in Mali and the Sahel, to which the Bundeswehr has contributed a significant number of troops and assets since the inception of both missions in 2013. The decision was voted by the parliamentary majority of the “grand coalition” (the conservative CDU/CSU and the social-democrats of the SPD), supported by the Liberals. Interestingly, a majority of Green deputies voted in favor of participation in MINUSMA, but refused to endorse German participation in EUTM, for the first time since 2013. The Greens criticized the planned extension of EUTM activities across the G5 to notably include the autocratic regime of Chad. They also pointed out the incoherent European engagement, as reflected by co-deployments and parallel initiatives of the EU and its member states. Debates on the Sahel attest to an increasing German weariness regarding the prospects and outlook of military engagement in the region.

In the United Nations Integrated Multidimensional Stabilization Mission in Mali (MINUSMA), German participation will remain at 1,100 troops. Most of these are based at Camp Castor in Gao and include a reconnaissance contingent operating, inter alia, a Heron 1 drone. Further troops consist of support staff, 20 police officers and several staff officers at the mission's headquarters in Bamako. The government plans to strengthen its contribution to UAV reconnaissance by increasing the number of flying hours. A second contingent is based at Niamey airport in neighboring Niger, providing tactical and strategic medical evacuation for Minusma.

In EUTM Mali, Germany will provide a maximum of 450 soldiers, up from the current level of 350. This comes on the heels of the renewal of EUTM’s mandate by the EU Council (23 March 2020), extending EUTM Mali for another four years until May 2024, and comprising two innovations.

First, EUTM’s area of operations will now include all of Mali; that is, training and advice will be provided closer to the Malian army units in the field, and no longer mostly out of Koulikoro, near Bamako. This is to reduce transaction costs and to generate better knowledge in order to facilitate more appropriate, adapted and effective training and advice in support of the Malian army. The EU Council decision invokes the term “mentoring”, but this is misleading. EUTM officials will offer so-called non-executive accompaniment up to the tactical level, but this rules out involvement in combat operations. Training and advice will be given in secure locations in garrisons and military bases. In addition, Berlin has responded favorably to the demand of Mali’s authorities to support a new army training center in central Mali, in cooperation with European partners.

The second innovation of EUTM’s mandate is that its geographical area of operation will be expanded to all countries of the G5 Sahel, with a focus on Burkina Faso and Niger. In due course, EUTM Mali will be turned into “EUTM Sahel” in all but name, to bolster the national armed forces and units of these countries serving under the banner of the Joint Force of the G5. As part of EUTM’s regionalization, Berlin plans to integrate a small contingent of German special forces into the mission, that have provided training to Niger’s special forces since 2018 (“Mission Gazelle”).

The new EUTM mandate is the outcome of both a strategic review and sustained bargaining among EU member states. It represents a compromise that accommodates the concerns and interests of troop contributing member states, including Germany, which was strictly opposed to an executive type of “mentoring” that would involve accompanying Malian troops in combat. In recent months, Germany had ruled out its participation in Task Force Takuba, a joint undertaking of special forces from European states under the command of Operation Barkhane, to be deployed in the second half of 2020 precisely to undertake more robust, high risk mentoring.

The German debate and decision-making on its military involvement in the Sahel reflects three basic tenets that French and other Europeans partners should consider:

1) The continued deployment of Germany’s largest military deployment abroad and the recurrent renewal of their mandate since 2013 suggests that the Sahel now firmly occupies a prominent and visible place in German foreign and defense policy, if only because the parliament has to endorse German participation in these missions, necessarily turning the Sahel into a subject of public debate.

2) The reluctance to put soldiers in harm’s way shapes the kind of participation that Germany is willing to provide, but only up to a point. While the necessity to deploy military and security for stabilization is widely acknowledged, as much or even more emphasis is placed on the idea that the military should be only one component. German debates about stabilization and related operations revolve far more explicitly around notions of an integrated or networked approach than has been the case in France, at least until recently.

3) The debate also reflects diverging views within the grand coalition on the use of force. The social-democratic party is particularly concerned about the potential over-emphasis of military and security, and specifically the predominance of military means to counter terrorism. This view is shared by the Green party, which rejects the idea of deepening the military footprint as flawed and counterproductive, and associates such an approach with France and Operation Barkhane.

Despite the German government’s commitment to military burden-sharing in the Sahel, which would have been unthinkable just a few years ago, there are clear limits to German engagement there. There is neither an appetite for more risk-taking, nor is there a belief that more military will change the wider dynamics in the region.

Like partners in Paris, Brussels and New York, Berlin notes “a rapidly deteriorating security situation” in the Sahel, despite significant outside engagement. But the conclusions drawn from this are not the same. France, in the wake of thePau summit, has opted for a course of action that emphasizes the need for additional military means (Operation Barkhane and Task Force Takuba) and more local responsibility on the part of Sahelian governments. It remains unclear what Berlin proposes to stop the downward spiral. The description of the new EUTM Mali mandate as “ambitious” is somewhat exaggerated. It may render EUTM marginally more effective, but this will in itself hardly be sufficient to induce substantial change in Mali and the region. At the same time, remarks by Minister of Defense Annegret Kramp-Karrenbauer suggest that the government is under no illusion about the duration of Germany’s engagement in the Sahel.

If the parliamentary debate and recent media reporting are an indication, a steadily progressing sense of skepticism towards the engagement in the Sahel is palpable. This is partly shaped by the political disillusion about the limited achievements of military intervention, especially in Afghanistan. Indeed, Afghanistan casts a long shadow on political thinking as the Bundeswehr, with a contingent of currently 1,250 soldiers as part of ”Resolute Support”, has commenced the 21st year of its presence there. German anxieties about an impending déjà-vu are omnipresent, as the numerous allusions to Afghanistan in the debate about the Sahel suggest.

That Germany should withdraw troops from Mali remains a minority view. Instead,there are growingcalls for a more strategic conversationon the Sahel, a welcome idea in view of the fact that talk about the Sahel, in Berlin as elsewhere, often lacks nuance as the indiscriminate use of buzzwords (extremism, terrorism, illegal migration, organized crime, climate change, ethnic conflict, corruption etc.) obfuscates a complex situation more than it helps illuminating it. There is no doubt that the Sahel has become a major foreign policy issue in Berlin, but it is unclear how much of a priority the Sahel really is among many others, of which the consequences of the COVID-19 pandemic is just the most pressing one.

Denis M. Tull is a Researcher at the Institute for Strategic Research (IRSEM) in Paris, on leave from the German Institute for International and Security Affairs (SWP) in Berlin. His current research focuses on foreign intervention in Mali.