Strategic Brief No. 50 - 2022 - South Korea and the Indopacific: A strategic coming of age? 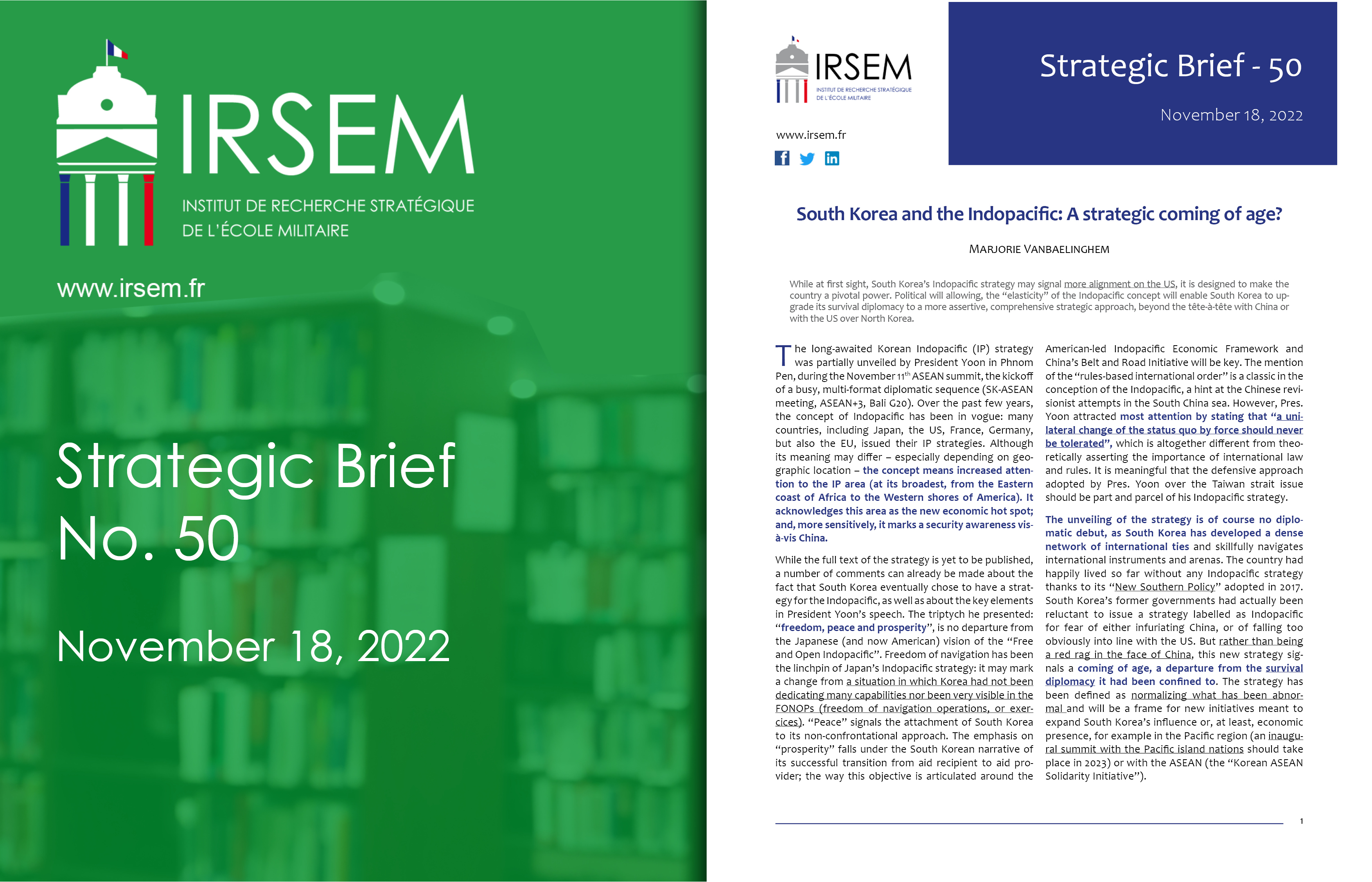 South Korea and the Indopacific: A strategic coming of age?

While at first sight, South Korea’s Indopacific strategy may signal more alignment on the US, it is designed to make the country a pivotal power. Political will allowing, the “elasticity” of the Indopacific concept will enable South Korea to upgrade its survival diplomacy to a more assertive, comprehensive strategic approach, beyond the tête-à-tête with China or with the US over North Korea.

The long-awaited Korean Indopacific (IP) strategy was partially unveiled by President Yoon in Phnom Pen, during the November 11th ASEAN summit, the kickoff of a busy, multi-format diplomatic sequence (SK-ASEAN meeting, ASEAN+3, Bali G20). Over the past few years, the concept of Indopacific has been in vogue: many countries, including Japan, the US, France, Germany, but also the EU, issued their IP strategies. Although its meaning may differ – especially depending on geographic location – the concept means increased attention to the IP area (at its broadest, from the Eastern coast of Africa to the Western shores of America). It acknowledges this area as the new economic hot spot; and, more sensitively, it marks a security awareness vis-à-vis China. While the full text of the strategy is yet to be published, a number of comments can already be made about the fact that South Korea eventually chose to have a strategy for the Indopacific, as well as about the key elements in President Yoon’s speech. The triptych he presented: “freedom, peace and prosperity”, is no departure from the Japanese (and now American) vision of the “Free and Open Indopacific”. Freedom of navigation has been the linchpin of Japan’s Indopacific strategy: it may mark a change from a situation in which Korea had not been dedicating many capabilities nor been very visible in the FONOPs (freedom of navigation operations, or exercices). “Peace” signals the attachment of South Korea to its non-confrontational approach. The emphasis on “prosperity” falls under the South Korean narrative of its successful transition from aid recipient to aid provider; the way this objective is articulated around the American-led Indopacific Economic Framework and China’s Belt and Road Initiative will be key. The mention of the “rules-based international order” is a classic in the conception of the Indopacific, a hint at the Chinese revisionist attempts in the South China sea. However, Pres. Yoon attracted most attention by stating that “a unilateral change of the status quo by force should never be tolerated”, which is altogether different from theoretically asserting the importance of international law and rules. It is meaningful that the defensive approach adopted by Pres. Yoon over the Taiwan strait issue should be part and parcel of his Indopacific strategy.

The unveiling of the strategy is of course no diplomatic debut, as South Korea has developed a dense network of international ties and skillfully navigates international instruments and arenas. The country had happily lived so far without any Indopacific strategy thanks to its “New Southern Policy” adopted in 2017. South Korea’s former governments had actually been reluctant to issue a strategy labelled as Indopacific for fear of either infuriating China, or of falling too obviously into line with the US. But rather than being a red rag in the face of China, this new strategy signals a coming of age, a departure from the survival diplomacy it had been confined to. The strategy has been defined as normalizing what has been abnormal and will be a frame for new initiatives meant to expand South Korea’s influence or, at least, economic presence, for example in the Pacific region (an inaugural summit with the Pacific island nations should take place in 2023) or with the ASEAN (the “Korean ASEAN Solidarity Initiative”).

The new president has every interest in raising his international profile at a moment of difficult internal and peninsular situations. First, because it was a promise to voters. Also, because no progress has been made on the issues of denuclearization and reconciliation. An “Audacious Initiative” was launched only to be belied by the recent North Korean ballistic hyperactivity. Besides, the Itaewon Halloween tragedy has seen the government’s approval ratings plummet.

Importantly, it comes at a time of renewed efforts to mend the relationship with Japan, with whom the relationship has been complex. South Korea participated, in November, to the Japanese International Naval Review for the first time in 7 years. A bilateral meeting between the two heads of government took place for the first time in 3 years on the sidelines of the ASEAN summit. South Korea may use its IP strategy, like Japan did, as a way to make some choices vis a vis China. Conversely, South Koreans may also want to do what some Japanese commentators are calling for: damage-control with regard to the US balance sheet in Asia, hence the need to gain strategic clout in their wider regional environment. In this regard too, it is telling that Pres. Yoon proposed a mechanism for a three-way dialogue with China and Japan. It is nothing really new as a Trilateral Cooperation Secretariat already exists; but it does show the will to talk things through as a trio.

Is it the end of the South Korean balancing act? Probably not. South Korea will remain caught up in the paradox of having the US as its main security provider and China as its main economic partner. South Korea has been even closer to the US under the Yoon presidency and indeed the announcement of the upcoming Indopacific strategy was made during Yoon’s maiden visit to the US.The drafting of the document was even initially entrusted to the North American directorate of the MEA. But although the country has experienced great frustration from China in the past years, especially after the Chinese sanctions responding to the Terminal High Altitude Area Defense (THAAD) agreement, there have also been bilateral issues with the US, among which the collateral damage of the US Inflation Act on the Korean e-vehicle industry.

Before the strategy was announced, some South Korean scholars argued that the strategic ambiguity had become “untenable” and that the alliance with the US should be balanced with contributions to international peace rather than spending most of the diplomatic effort on North Korea. Some suggested that finding a nexus between the New Southern Policy and the US Indopacific strategy would be “an investment in insurance for the US-Korea alliance”; whereas blending the concepts with minilateralism would make it BRI-compatible “without causing the US to misperceive that South Korea is tilting toward China”.

While it is never easy to put an end to a delicate balancing act successfully, the Korean Indopacific strategy will serve the objective of making Korea a “pivotal power”, which amounts to more assertiveness, dependability and visibility. There is no explicit intention of looking beyond the American ally – the risk of damaging the alliance would be a step too far for Yoon. Nevertheless, his speech was rife with “ASEAN-compatible” or “minilateral-compatible” mentions , like the promise of “active contribution diplomacy in climate change, digital gap and health” as well as in non-proliferation, anti-terrorism, maritime, cyber, health security. So, even if the balancing act doesn’t end, South Korea may move beyond its two overlapping tête-à-tête, with the US and with China (the two having North Korea as their juncture), with the IP rhetoric.

Rory Medcalf wrote about the “totemic significance” of the concept of Indopacific, both “a message to a rising China that it cannot expect others to accept its self-image as the centre of the region and the world [and] that China and America are not the only two nations that count”. But the concept of the Indopacific has evolved, precisely because it has been used by so many different actors: it has lost some of its teeth and is now more of a label or a frame to use with respect to foreign policy initiatives. It has also become perfectly EU-compatible, a way to speak a common diplomatic language, open-ended and not exclusive to the bilateral relation with the US, or even to within Asia-Pacific. As a matter of fact, South Korea was more vocal and straightforward in its positioning on the Ukraine war than it had been during the Crimea crisis. Being perceived as a like-minded partner can be crucial to increasing a collaboration with the EU that is already strong but still has potential, and also to further developing its armament exports (as it recently did with Poland).

Framing South Korea’s diplomatic and strategic initiatives into an Indopacific strategy doesn’t mean writing an altogether new strategic playbook yet, but rather tying together many threads into a policy that caters to (almost) all tastes, while preventing further blackmail from China. It signals the increased dependability of the country and its will to cooperate outside the peninsula, as well as beyond Asia, without downplaying the core issue of Korea’s security.

Currently the acting director of IRSEM, Dr Marjorie Vanbaelinghem is a career diplomat who served in Japan and India, among other postings.