Strategic Brief No. 49 - 2022 - Intimidation of the elites and population control in Russia 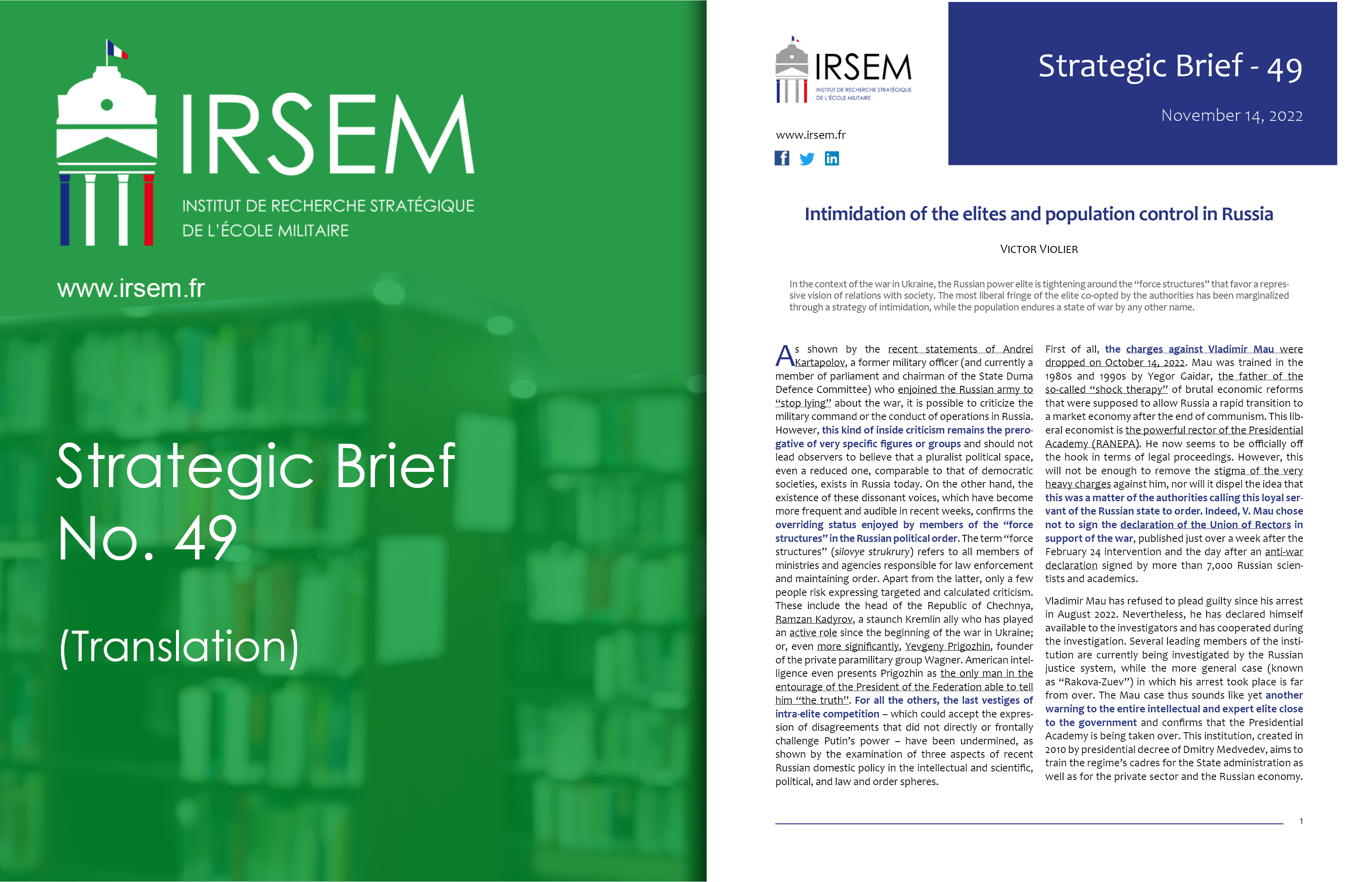 Intimidation of the elites and population control in Russia

In the context of the war in Ukraine, the Russian power elite is tightening around the "force structures" that favor a repressive vision of relations with society. The most liberal fringe of the elite co-opted by the authorities has been marginalized through a strategy of intimidation, while the population endures a state of war by any other name.

As shown by the recent statements of AndreiKartapolov, a former military officer (and currently a member of parliament and chairman of the State Duma Defence Committee) who enjoined the Russian army to "stop lying" about the war, it is possible to criticize the military command or the conduct of operations in Russia. However, this kind of inside criticism remains the prerogative of very specific figures or groups and should not lead observers to believe that a pluralist political space, even a reduced one, comparable to that of democratic societies, exists in Russia today. On the other hand, the existence of these dissonant voices, which have become more frequent and audible in recent weeks, confirms the overriding status enjoyed by members of the “force structures” in the Russian political order. The term “force structures" (silovye strukrury) refers to all members of ministries and agencies responsible for law enforcement and maintaining order. Apart from the latter, only a few people risk expressing targeted and calculated criticism. These include the head of the Republic of Chechnya, Ramzan Kadyrov, a staunch Kremlin ally who has played an active role since the beginning of the war in Ukraine; or, even more significantly, Yevgeny Prigozhin, founder of the private paramilitary group Wagner. American intelligence even presents Prigozhin as the only man in the entourage of the President of the Federation able to tell him "the truth". For all the others, the last vestiges of intra-elite competition – which could accept the expression of disagreements that did not directly or frontally challenge Putin's power – have been undermined, as shown by the examination of three aspects of recent Russian domestic policy in the intellectual and scientific, political, and law and order spheres.

First of all, the charges against Vladimir Mau were dropped on October 14, 2022. Mau was trained in the 1980s and 1990s by Yegor Gaidar, the father of the so-called "shock therapy" of brutal economic reforms that were supposed to allow Russia a rapid transition to a market economy after the end of communism. This liberal economist is the powerful rector of the Presidential Academy (RANEPA). He now seems to be officially off the hook in terms of legal proceedings. However, this will not be enough to remove the stigma of the very heavy charges against him, nor will it dispel the idea that this was a matter of the authorities calling this loyal servant of the Russian state to order. Indeed, V. Mau chose not to sign the declaration of the Union of Rectors in support of the war, published just over a week after the February 24 intervention and the day after an anti-war declaration signed by more than 7,000 Russian scientists and academics.

Vladimir Mau has refused to plead guilty since his arrest in August 2022. Nevertheless, he has declared himself available to the investigators and has cooperated during the investigation. Several leading members of the institution are currently being investigated by the Russian justice system, while the more general case (known as "Rakova-Zuev") in which his arrest took place is far from over. The Mau case thus sounds like yet another warning to the entire intellectual and expert elite close to the government and confirms that the Presidential Academy is being taken over. This institution, created in 2010 by presidential decree of Dmitry Medvedev, aims to train the regime's cadres for the State administration as well as for the private sector and the Russian economy. Finally, this case is part of a broader context of attacks against academics and intellectuals.

Second, former 2018 presidential candidate Ksenia Sobchak fled to Lithuania on October 26. A businesswoman and television host, she is the daughter of Anatoly Sobchak, a former lawyer and then law professor who taught Vladimir Putin at Leningrad University; he later recruited Putin to the St. Petersburg mayor's office after his election in June 1991. Anatoly Sobchak is thus considered to be the political mentor of Vladimir Putin and the latter is said to be the godfather of his daughter, Ksenia.

Ksenia Sobchak’s flight is all the more surprising since she has never been considered, either by most observers, or by most Russian political actors, in particular the liberal opposition, as a real opponent or even a threat to Vladimir Putin's power. On the contrary, she has sometimes been accused of being a "Trojan horse" of the Kremlin in the Russian political arena; or as a mere foil for the regime's democratic pretenses. Her presence in the media and her political activity contributed rather to clouding the image of the true opposition, according to human rights organizations and activists who constituted opposition outside the system.

Thus, with the exception of an increasingly restricted group, the government is developing a strategy of intimidation of the elites that affects even insiders.

Third, the measures taken within Russia's territory to extend the implementation of martial law in the annexed territories are evidence of a new stage in the centralization of power and the tightening of control over the population. On October 19th, Vladimir Putin decreed (Presidential Decree No. 756) the introduction of martial law in four Ukrainian territories – Donetsk, Luhansk, Kherson and Zaporizhia – occupied and officially annexed by the Russian Federation in September following illegal referenda that are not recognized by the international community. Furthermore, the following decree, Presidential Decree No. 757, also provides for an increased level of security (described as a "regime of reaction of the "medium level") in the Russian regions bordering Ukraine, including the Republic of Crimea, the Krasnodar, Belgorod, Bryansk, Voronezh and Kursk Krai, as well as the Oblasts of Rostov-on-Don and Sevastopol.

These measures grant extensive powers to the heads of local authorities (governors) and to the administration, while individual freedoms especially are restricted. In order to "strengthen the protection of public order and security" and to ensure "the protection of military and other important state installations," local authorities are authorized to take restrictive measures, including to displace populations, to restrict entry and exit from the territories concerned, and to restrict the movement of vehicles and to conduct searches.

In addition, the subjects of the Federation not already affected by the previous measures and who belong to the federal districts of the Centre, (where the capital Moscow is located), and the South, (capital Rostov-on-Don), are also subject to an increased level of security described as a "heightened preparedness level". This also leads to the introduction of new measures restricting the freedoms of the population. This package of security measures, together with the gradation presented and the next steps it suggests, together with other indicators, point to a new hardening of power, not only in its arbitrariness and intra-elitist struggles, but also in its repressive practices and its claim to hegemonic control of the population. As the war continues and the Russian military becomes bogged down on the ground, the pendulum of power centralization in post-Soviet Russia, is now defying the laws of physics due to an unprecedented aggravation. The pendulum of power centralization in post-Soviet Russia describes the shift from a "pole of extreme consolidation" in the Soviet Union to a "pole where 'dominant power' and state capitalism flout a balance between democracy and the market economy" by the end of the 2000s (V. Gelman).

While a majority of analysts now consider that the future of the Russian regime and the outcome of the war depend on V. Putin's ability to consolidate his leadership within the power elite, a new stage has been reached. This new stage of repression and security is manifested in the tightening of control over the population and a new wave of intimidation of the co-opted elites, even though most members of the political opposition are already in prison or in exile. Behind the repression and arbitrariness of Putin's power, the new predominance of “force structures” is emerging.