Strategic Brief No. 48 - 2022 - How Does the Party Present its (Rather Bad) Economic Results and What it Intends to Do About it ?

Accueil - IRSEM > Publications > Brèves stratégiques / Strategic Briefs > Strategic Brief No. 48 - 2022 - How Does the Party Present its (Rather Bad) Economic Results and What it Intends to Do About it ? 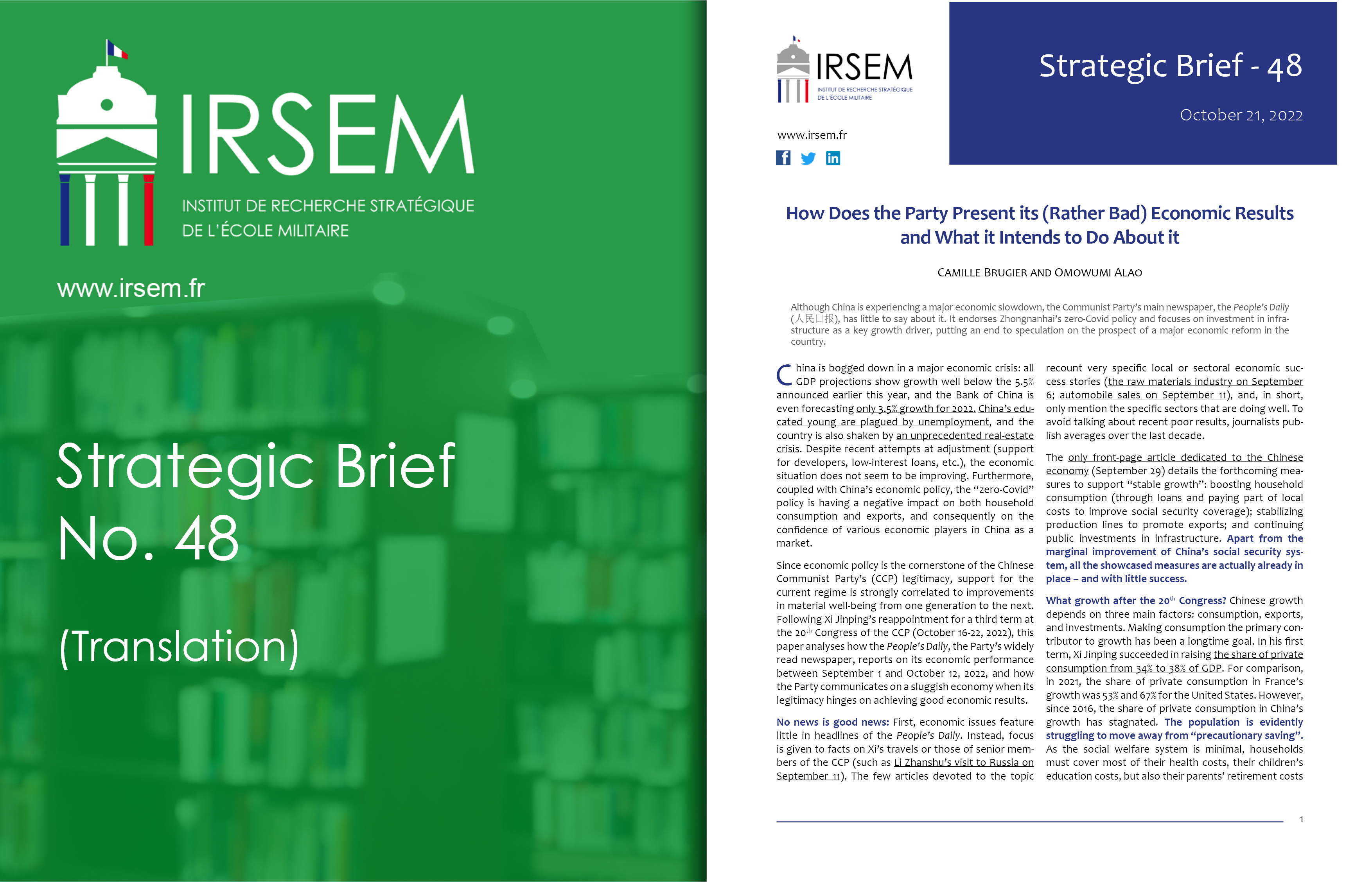 How Does the Party Present its (Rather Bad) Economic Results and What it Intends to Do About it ?

Although China is experiencing a major economic slowdown, the Communist Party’s main newspaper, the People’s Daily (人民日报), has little to say about it. It endorses Zhongnanhai’s zero-Covid policy and focuses on investment in infrastructure as a key growth driver, putting an end to speculation on the prospect of a major economic reform in the country.

China is bogged down in a major economic crisis: all GDP projections show growth well below the 5.5% announced earlier this year, and the Bank of China is even forecasting only 3.5% growth for 2022. China’s educated young are plagued by unemployment, and the country is also shaken by an unprecedented real-estate crisis. Despite recent attempts at adjustment (support for developers, low-interest loans, etc.), the economic situation does not seem to be improving. Furthermore, coupled with China’s economic policy, the “zero-Covid” policy is having a negative impact on both household consumption and exports, and consequently on the confidence of various economic players in China as a market.

Since economic policy is the cornerstone of the Chinese Communist Party’s (CCP) legitimacy, support for the current regime is strongly correlated to improvements in material well-being from one generation to the next. Following Xi Jinping’s reappointment for a third term at the 20th Congress of the CCP (October 16-22, 2022), this paper analyses how the People’s Daily, the Party’s widely read newspaper, reports on its economic performance between September 1 and October 12, 2022, and how the Party communicates on a sluggish economy when its legitimacy hinges on achieving good economic results.

No news is good news: First, economic issues feature little in headlines of the People’s Daily. Instead, focus is given to facts on Xi’s travels or those of senior members of the CCP (such as Li Zhanshu’s visit to Russia on September 11). The few articles devoted to the topic recount very specific local or sectoral economic success stories (the raw materials industry on September 6; automobile sales on September 11), and, in short, only mention the specific sectors that are doing well. To avoid talking about recent poor results, journalists publish averages over the last decade.

The only front-page article dedicated to the Chinese economy (September 29) details the forthcoming measures to support “stable growth”: boosting household consumption (through loans and paying part of local costs to improve social security coverage); stabilizing production lines to promote exports; and continuing public investments in infrastructure. Apart from the marginal improvement of China’s social security system, all the showcased measures are actually already in place – and with little success.

What growth after the 20th Congress? Chinese growth depends on three main factors: consumption, exports, and investments. Making consumption the primary contributor to growth has been a longtime goal. In his first term, Xi Jinping succeeded in raising the share of private consumption from 34% to 38% of GDP. For comparison, in 2021, the share of private consumption in France’s growth was 53% and 67% for the United States. However, since 2016, the share of private consumption in China’s growth has stagnated. The population is evidently struggling to move away from “precautionary saving”. As the social welfare system is minimal, households must cover most of their health costs, their children’s education costs, but also their parents’ retirement costs – hence the massive recourse to saving. Moreover, since the Chinese financial system is only partially liberalized, investing in real estate is the only way to make savings grow, which explains the extreme impact of the real-estate crisis on households, with a significant risk of discontent among the population.

Chinese exports are an important source of growth (20% in 2021), but they are potentially subject to sanctions abroad. The Chinese government therefore considers them to be volatile and risky, thus increasing the need for private consumption as a lever for growth. Beijing pursues this policy while seeking to maintain a steady supply chain for major markets that include the United States and the European Union, in order to prevent them from sourcing elsewhere.

Was the zero-Covid policy an economic decision? Recently, the Covid-19 crisis and its repeated and unpredictable lockdowns have exacerbated the tendency to opt for precautionary saving, as households can find themselves without any income overnight. Some trends in vogue on social media thus explain “how to consume less”, running counter to the government’s goal of encouraging consumption. Lockdowns have also had a considerable impact on Chinese exports and on the confidence of states that depend on supplies from China.

Despite the palpable tension among the population, the Chinese press has not made any admission of failure. In fact, over the past two months, the People’s Daily has made very little mention of the epidemic. When it does, during national vacations when a lot of people travel, the policy in place is not discussed. On the contrary, provinces and localities are reminded to strictly follow the ninth edition of the prevention and control protocol (tracing, screening, quarantining).

One article in the People’s Daily dated October 5 even considers the measures taken in China to be the most effective in terms of health and the economy for a population of this size, and is critical of “certain foreign countries that have chosen to ‘give in’ in the face of the epidemic”.

In a similar article on October 8, the People’s Daily says that only preventive and control measures could minimize the impact of the pandemic on economic development and on citizens’ lives. Furthermore, in an interview published on October 12, Liang Wannian, one of the experts in charge of the zero-Covid policy, acknowledged the effects the pandemic has had on several areas, including the economy. However, he says the policy is still the right one, even though it has been necessary to “take a trickier path” for health security reasons.

So, does this mean that there is no prospect of a change in strategy? China is balancing the health risk of a gradual opening, with its insufficiently vaccinated population, against the economic need to reopen. To the CCP, the zero-Covid policy, in addition to being the most efficient economic solution, remains the most relevant and most adapted to local conditions.

Investments are yet again presented as the country’s main means of supporting growth. In articles on the economy, the People’s Daily focuses on public investments in infrastructure (headlining construction projects on September 7, 12 and 20). The almost daily “Welcome to the 20th Congress” column, which allows important private and public players to present projects, also mainly highlights large-scale investments made by the Chinese government. But this levy alone no longer seems sufficient to restore growth. Even though China’s recent economic outcomes require a new approach, the People’s Daily and, through it, the Chinese Communist Party, seem to prefer a traditional economic tool used by the People’s Republic of China: investments, although their efficiency has proved to be very limited. Will this be enough in the face of growing popular discontent?

In his opening speech to the 20th Congress, President Xi Jinping said he wanted to see “high-quality” development, favoring growth that is admittedly more modest but is focused on domestic demand. This rhetorical element re-emphasized China’s long-standing goal of relying more on consumption as a driver of growth. However, by foregrounding infrastructure investments as the preferred economic tool, the Chinese government does not seem prepared to take the necessary steps for the economic turn that is required.