Strategic Brief No. 44 - 2022 - What made the Ukrainian resistance possible 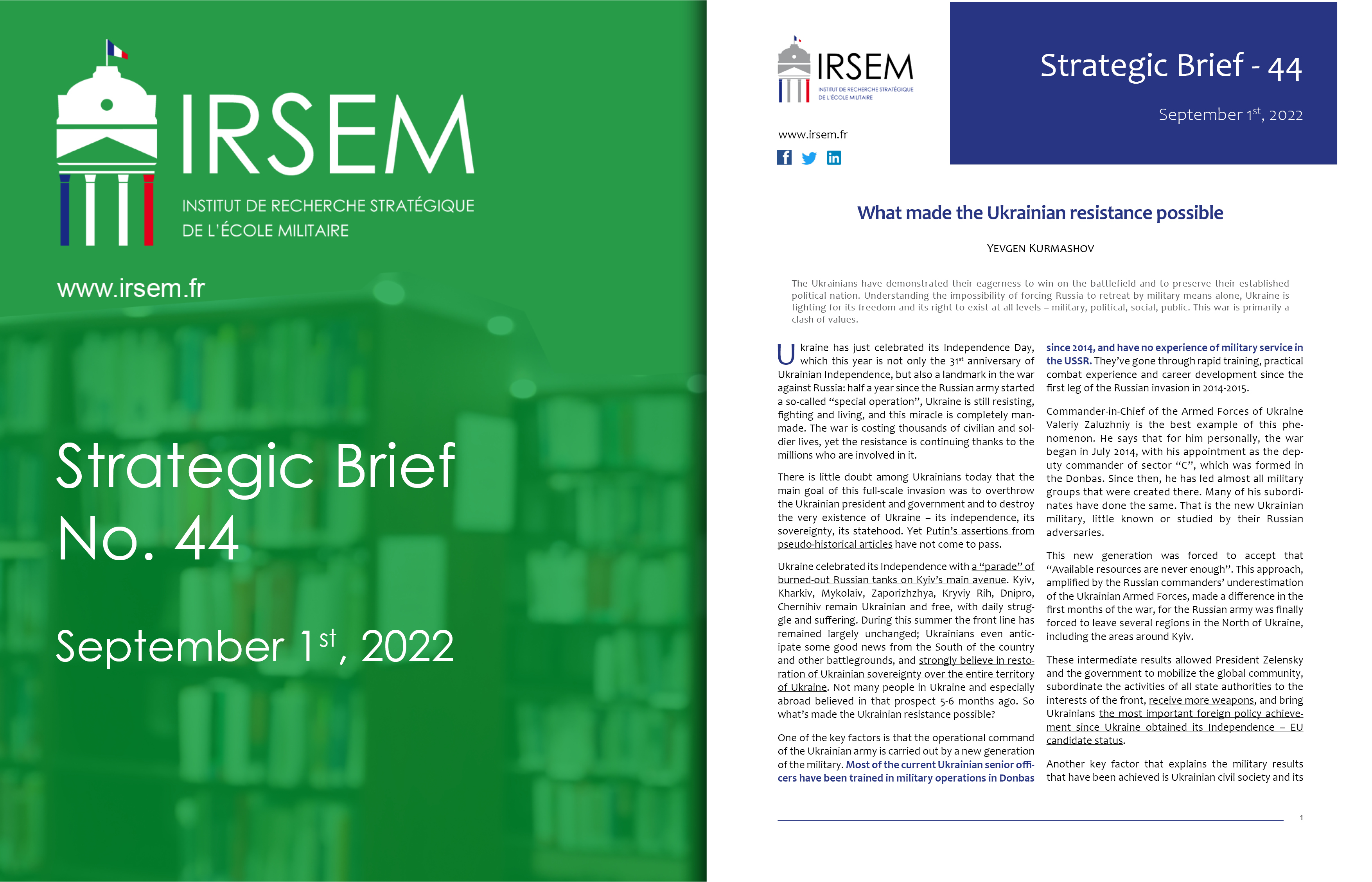 What made the Ukrainian resistance possible

The Ukrainians have demonstrated their eagerness to win on the battlefield and to preserve their established political nation. Understanding the impossibility of forcing Russia to retreat by military means alone, Ukraine is fighting for its freedom and its right to exist at all levels – military, political, social, public. This war is primarily a clash of values.

Ukraine has just celebrated its Independence Day, which this year is not only the 31st anniversary of Ukrainian Independence, but also a landmark in the war against Russia: half a year since the Russian army started a so-called “special operation”, Ukraine is still resisting, fighting and living, and this miracle is completely man-made. The war is costing thousands of civilian and soldier lives, yet the resistance is continuing thanks to the millions who are involved in it.

There is little doubt among Ukrainians today that the main goal of this full-scale invasion was to overthrow the Ukrainian president and government and to destroy the very existence of Ukraine – its independence, its sovereignty, its statehood. Yet Putin’s assertions from pseudo-historical articles have not come to pass.

Ukraine celebrated its Independence with a “parade” of burned-out Russian tanks on Kyiv’s main avenue. Kyiv, Kharkiv, Mykolaiv, Zaporizhzhya, Kryviy Rih, Dnipro, Chernihiv remain Ukrainian and free, with daily struggle and suffering. During this summer the front line has remained largely unchanged; Ukrainians even anticipate some good news from the South of the country and other battlegrounds, and strongly believe in restoration of Ukrainian sovereignty over the entire territory of Ukraine. Not many people in Ukraine and especially abroad believed in that prospect 5-6 months ago. So what’s made the Ukrainian resistance possible?

One of the key factors is that the operational command of the Ukrainian army is carried out by a new generation of the military. Most of the current Ukrainian senior officers have been trained in military operations in Donbas since 2014, and have no experience of military service in the USSR. They’ve gone through rapid training, practical combat experience and career development since the first leg of the Russian invasion in 2014-2015.

Commander-in-Chief of the Armed Forces of Ukraine Valeriy Zaluzhniy is the best example of this phenomenon. He says that for him personally, the war began in July 2014, with his appointment as the deputy commander of sector "C", which was formed in the Donbas. Since then, he has led almost all military groups that were created there. Many of his subordinates have done the same. That is the new Ukrainian military, little known or studied by their Russian adversaries.

This new generation was forced to accept that “Available resources are never enough”. This approach, amplified by the Russian commanders’ underestimation of the Ukrainian Armed Forces, made a difference in the first months of the war, for the Russian army was finally forced to leave several regions in the North of Ukraine, including the areas around Kyiv.

These intermediate results allowed President Zelensky and the government to mobilize the global community, subordinate the activities of all state authorities to the interests of the front, receive more weapons, and bring Ukrainians the most important foreign policy achievement since Ukraine obtained its Independence – EU candidate status.

Another key factor that explains the military results that have been achieved is Ukrainian civil society and its resistance together with soldiers and commanders, that is the phenomenon of Ukrainian “spiritual forces”.

The majority of Ukrainians consider this war as an onslaught on Ukrainian sovereignty and Ukraine’s very existence. Thus everyone is responsible for defense. President Volodymyr Zelensky’s call to all citizens to make their own contribution to the future victory even if they are not on the front line, was widely heeded.

First, there is a common understanding of the nature of the threat. Ukraine now fights as a nation. Millions of Ukrainians understand that the Russian invasion does not aim to annex new territories or prevent Ukraine from joining NATO, but to destroy its very existence. Rather, this is the greatest existential threat since the great famine in 1932-1933, Stalin’s repression of 1937, and post-WWII deportations.

Second, there is a shared view of the means needed in order to prevail: fight till the end. Millions of Ukrainians acknowledge that there is not much room for negotiation and trade-offs with the country that is seeking to annihilate them. Recently, Ukraine's Security Service informed people that only every 20th missile fired by the Russian Federation over Ukraine hit a military object, the remaining 19 hit residential buildings, schools, and hospitals. 17,300 civilian objects have been targeted in Ukraine since February 24.

The Russian Army “congratulated” Ukrainians with massive missile strikes on 24th August and killed more than 25 civilians in a train at a railway station in Chaplino, Dnipropetrovsk region. Even optimists understand that there are no red lines for the Russian army and the Kremlin since Russia put the slogan “We can repeat” at the center of domestic discourse around WWII.

Today Ukrainians contribute their resources, capacities, and skills to the needs of the Armed Forces. Although there is no chance to beat Russia militarily, it is possible for all the nation to stop the aggression. Small funds have turned in just a few years into the large non-state technology and ammunition suppliers for the Ukrainian Armed Forces. Ukrainian companies donate millions of dollars for weapons and equipment. Despite the dangers, small businesses are returning to work to reboot the economy and pay taxes. Every month millions of citizens donate money to the military needs in spite of lower incomes and rising rates of unemployment. Thousands of people left their common lifestyle to deliver goods and food to the front line soldiers, or to rescue civilians in their private cars.

Widespread partisan activity in the occupied territories has been taking place in the south of Ukraine – in the occupied areas around Kherson and Zaporizhzhya. Working beyond the front line, partisans who most often are volunteers, and not military personnel, do an extremely risky and useful job as the eyes and ears of the Ukrainian military command. They increase the odds of de-occupation of territories and help the Armed Forces of Ukraine to successfully identify and reduce the logistical capabilities of the occupiers.

Indeed, the Russian invasion of Ukraine caused unparalleled interaction between Ukrainians in post-Second World War history. Putin’s decision to launch the offensive against Ukraine destroyed his own narrative about Ukraine being a fake nation and a failed state. Even sceptics should now accept that Ukraine is an accomplished nation and an independent state with unique people, who are resisting and fighting.

Thus far, the components of Ukrainian success have been the sacred union, a modern professional army, thousands of motivated mobilized soldiers, a committed civil society and, last but not least, important arms deliveries from international partners.

Given the attrition, the Armed Forces of Ukraine will need more resources and capacities in the next phase of the war. This was the central message in the speech of Jens Stoltenberg, NATO Secretary-General, during the Crimea Platform Summit that was held last week. The Russian army now knows the Ukrainian way of war much better, and the shortage of heavy weapons is going to have a greater impact on the situation this autumn. Ukraine still critically needs more heavy weapons, air defense systems and unmanned aerial vehicles and expects this aid to be forthcoming.

The “spiritual forces” of Ukrainian society also rely on news from the battlefields and the continuous extension of broad international support. For almost all Ukrainians it is important to see their country on the same path as the leading countries of the free world. Whether Putin can be stopped and withdraw completely depends first and foremost on the ability of the Ukrainian people to resist and win back the occupied lands and territories. In the long run this fight needs to be pursued hand in hand with Ukraine’s allies.

Yevgen Kurmashov is the Director for political programs at Gorshenin Institute (Kyiv, Ukraine), one of the leading Ukrainian non-state expert institutions focused on domestic politics, international affairs, economics, energy. His activities were temporary suspended because of war. Сurrently he is a visiting scholar at IRSEM and a PAUSE program laureate at Paris-Pantheon-Assas University.