Strategic Brief no. 40 - 2022 - Sudan foreign policy after the coup: military-led, security-focused, and aligning with Russia? 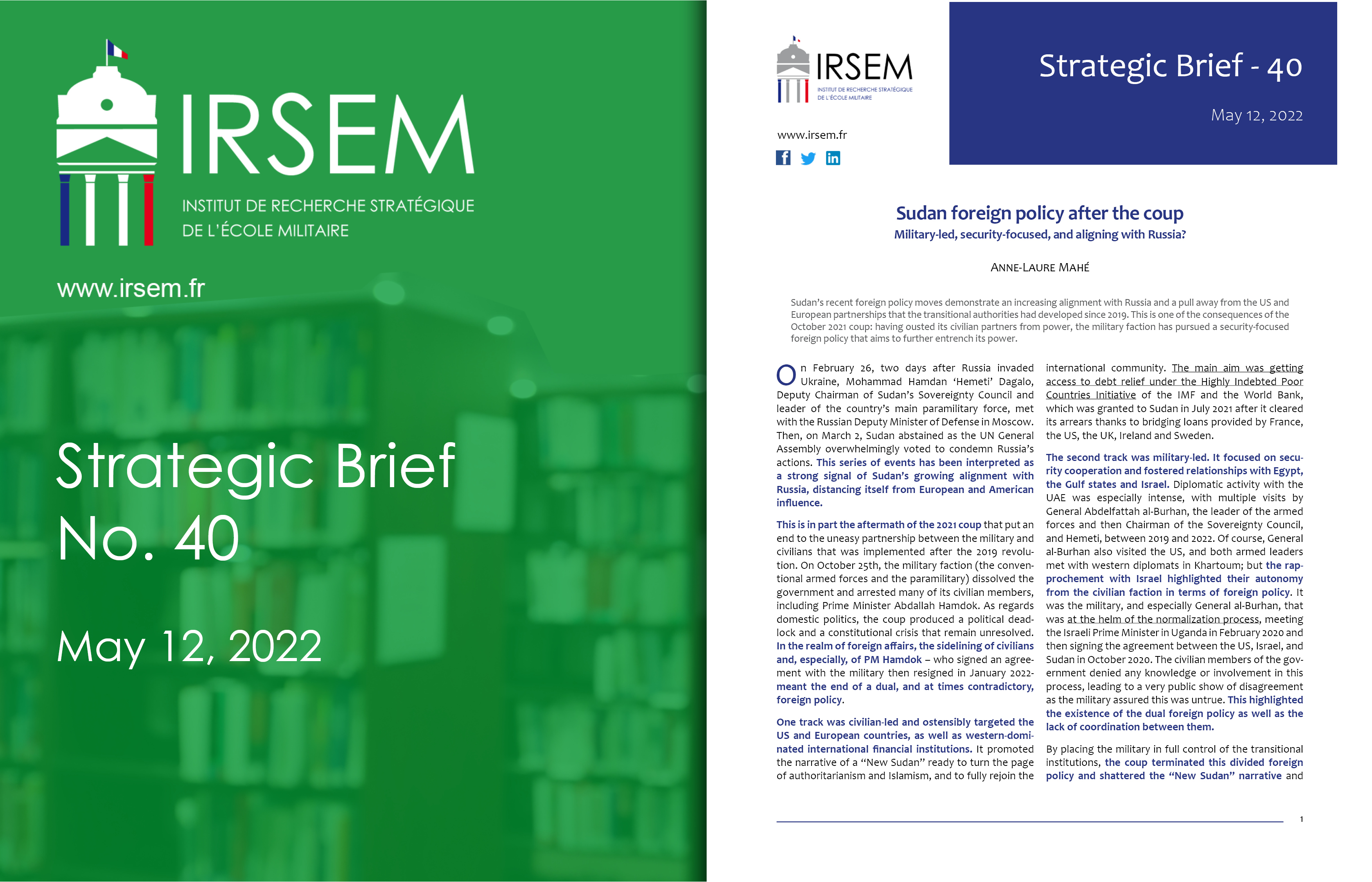 military-led, security-focused, and aligning with Russia?

Sudan’s recent foreign policy moves demonstrate an increasing alignment with Russia and a pull away from the US and European partnerships that the transitional authorities had developed since 2019. This is one of the consequences of the October 2021 coup: having ousted its civilian partners from power, the military faction has pursued a security-focused foreign policy that aims to further entrench its power.

On February 26, two days after Russia invaded Ukraine, Mohammad Hamdan ‘Hemeti’ Dagalo, Deputy Chairman of Sudan’s Sovereignty Council and leader of the country’s main paramilitary force, met with the Russian Deputy Minister of Defense in Moscow. Then, on March 2, Sudan abstained as the UN General Assembly overwhelmingly voted to condemn Russia’s actions. This series of events has been interpreted as a strong signal of Sudan’s growing alignment with Russia, distancing itself from European and American influence.

This is in part the aftermath of the 2021 coup that put an end to the uneasy partnership between the military and civilians that was implemented after the 2019 revolution. On October 25th, the military faction (the conventional armed forces and the paramilitary) dissolved the government and arrested many of its civilian members, including Prime Minister Abdallah Hamdok. As regards domestic politics, the coup produced a political deadlock and a constitutional crisis that remain unresolved. In the realm of foreign affairs, the sidelining of civilians and, especially, of PM Hamdok - who signed an agreement with the military then resigned in January 2022- meant the end of a dual, and at times contradictory, foreign policy.

One track was civilian-led and ostensibly targeted the US and European countries, as well as western-dominated international financial institutions. It promoted the narrative of a « New Sudan » ready to turn the page of authoritarianism and Islamism, and to fully rejoin the international community. The main aim was getting access to debt relief under the Highly Indebted Poor Countries Initiative of the IMF and the World Bank, which was granted to Sudan in July 2021 after it cleared its arrears thanks to bridging loans provided by France, the US, the UK, Ireland and Sweden.

The second track was military-led. It focused on security cooperation and fostered relationships with Egypt, the Gulf states and Israel. Diplomatic activity with the UAE was especially intense, with multiple visits by General Abdelfattah al-Burhan, the leader of the armed forces and then Chairman of the Sovereignty Council, and Hemeti, between 2019 and 2022. Of course, General al-Burhan also visited the US, and both armed leaders met with western diplomats in Khartoum; but the rapprochement with Israel highlighted their autonomy from the civilian faction in terms of foreign policy. It was the military, and especially General al-Burhan, that was at the helm of the normalization process, meeting the Israeli Prime Minister in Uganda in February 2020 and then signing the agreement between the US, Israel, and Sudan in October 2020. The civilian members of the government denied any knowledge or involvement in this process, leading to a very public show of disagreement as the military assured this was untrue. This highlighted the existence of the dual foreign policy as well as the lack of coordination between them.

By placing the military in full control of the transitional institutions, the coup terminated this divided foreign policy and shattered the « New Sudan » narrative and its adjoining policies. Most of the International community condemned the coup, called for the release of the imprisoned civilians, and for the reinstatement of PM Hamdok. The World Bank, the US and European partners suspended all or part of their aid. In a country whose economic situation had constantly deteriorated over the past 10 years - from April to December 2021, the cost of local food basket increased from SDG152.2 to SDG270.85 - this represented a major hurdle.

The sole dissenting voice was Russia, whose foreign minister attributed the political crisis to destabilizing actions by Western powers. The Russian refusal to fully condemn the coup could be understood in the context of ongoing negotiations about the construction of a naval base in Port Sudan. The timeline and even the existence of an agreement remains unclear, but the project was apparently first discussed during a visit to Sochi by Omar al-Bashir in November 2017. On this occasion, the Sudanese President described Sudan as « Russia’s key to Africa» and asked for Russia’s protection, because Sudan was « in need of protection from the aggressive acts of the United States». This was ironic, since Sudanese authorities were simultaneously lobbying for the lifting of sanctions and had achieved some success in October 2017, when the US did indeed lift a trade embargo dating back to 1997.

However, according to Russian sources, it was only in late 2020 that an actual deal for the naval base was reached. This was never confirmed by Sudanese authorities, and in June 2021, top military officials declared that the agreement would be reviewed to ensure that it would serve Sudan’s best interests. This was reiterated in July 2021 by foreign minister Maryam al-Mahdi during a visit to Moscow, demonstrating rare coordination between the military and civilians. The apparent wavering by Sudanese authorities might have resulted from American pressure: in March, a US warship docked in Port Sudan just a day after a Russian frigate. It might also have been a strategy to negotiate additional Russian economic aid in a context of international competition around the Red Sea that increased Sudan’s strategic value. Though no final decision was taken about Port Sudan in 2021, US officials have recently expressed increasing concerns about the project.

For Sudanese authorities, aligning with Russia is not necessarily a major change as much as reinvigorating an old alliance. In the 1980s, the USSR was, along with the US, one of Sudan’s main donors in terms of military aid. This changed with the 1989 Islamist-military coup and the start of oil exports in the late 1990s: China, the main importer of Sudanese oil, became one of the major arms providers for Sudan, along with Iran, as well as its main economic partner. While reliable statistics are difficult to find, estimates from the Bank of Sudan were that Russia’s trade accounted for 0,9% of Sudan’s import in 2009.

The situation evolved after South Sudan’s independence in 2011. Since most oil wells were located there, Sudan, now only a transit country, lost its main source of revenue and foreign currency. Its economy progressively deteriorated, leading Omar al-Bashir to court new partners, including Russia. Tellingly, in 2018 Russia entered the list of Sudan’s top five exporters, coming second after China and before Saudi Arabia, India, and the UAE. During the 2018/2019 protests, rumors in Khartoum circulated about the presence of mercenaries from the Wagner Group in the entourage of the embattled President and there were reports of their involvement in repressing the demonstrations. Recently, the group appeared to be mostly involved in providing security for gold mining assets.

Sudan’s alignment with Russia appears as a diplomatic move mostly based on security concerns and on a relationship driven overwhelmingly by military cooperation, and much less by the aim of gaining foreign economic support. For many individuals and organizations fighting for a democratic transition on the ground, this can only foster the new authoritarian system emerging in Sudan. Nonetheless, the military is not governing alone: in the process of ousting the civilians, it has allied with former rebel movements, some of whom have affirmed their commitment to delivering former President Omar al-Bashir to the ICC. As alliances and power relationships remain fragile and in flux in Khartoum, other foreign policy changes might be expected. Moreover, Sudanese authorities have long been skilled at cultivating multiple, and sometimes contradictory, alliances.

Anne-Laure Mahé is the East Africa research fellow at the Institute for Strategic Research (IRSEM, Paris). She holds a PhD in political science and conducts research on authoritarianism.