Accueil - IRSEM > Publications > Brèves stratégiques / Strategic Briefs > Strategic Brief no. 39 - 2022 - « Co-belligerency » or when does a State become a party to an armed conflict? 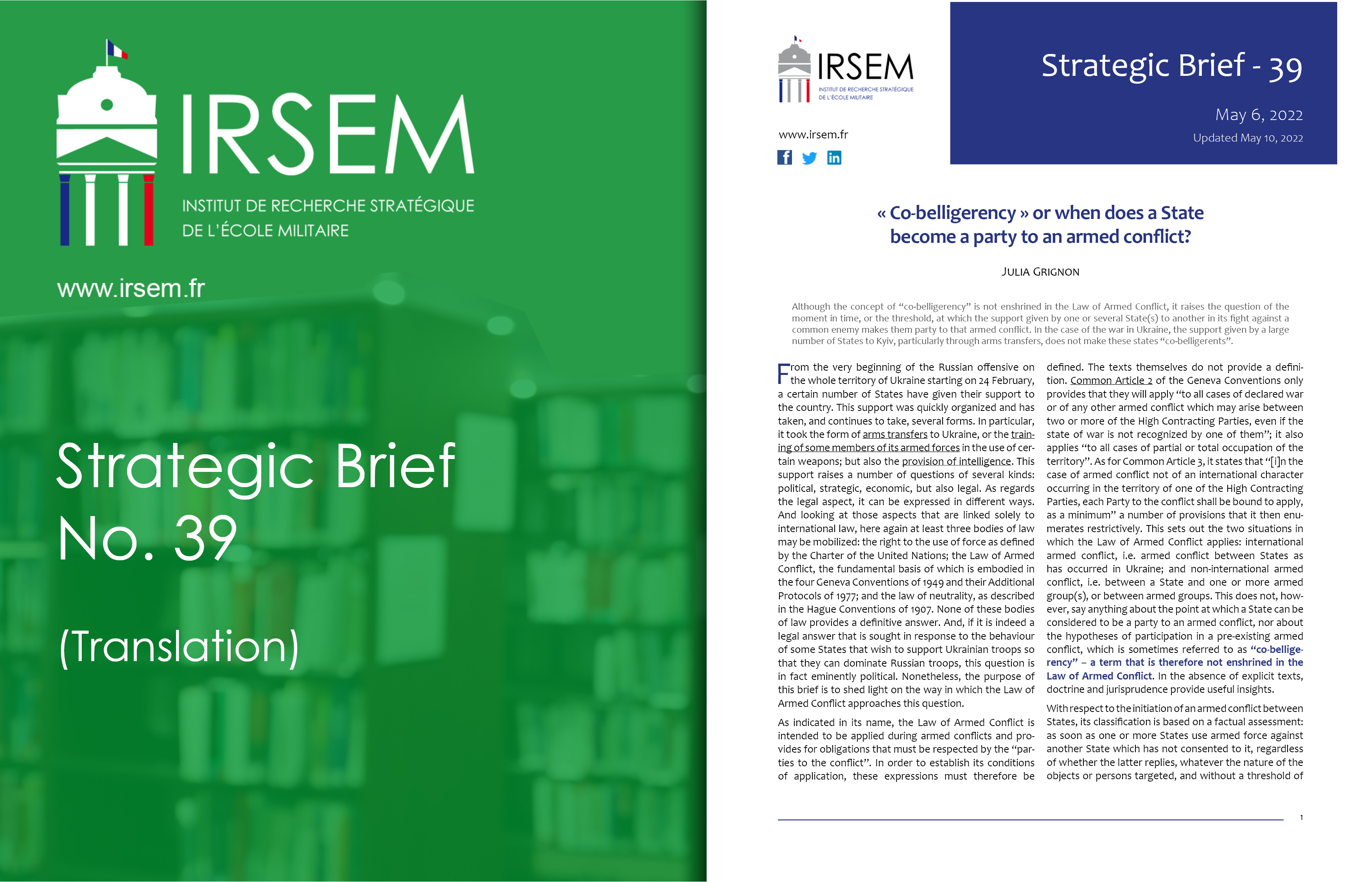 « Co-belligerency » or when does a State become a party to an armed conflict?

Although the concept of “co-belligerency” is not enshrined in the Law of Armed Conflict, it raises the question of the moment in time, or the threshold, at which the support given by one or several State(s) to another in its fight against a common enemy makes them party to that armed conflict. In the case of the war in Ukraine, the support given by a large number of States to Kyiv, particularly through arms transfers, does not make these states “co-belligerents”.

From the very beginning of the Russian offensive on the whole territory of Ukraine starting on 24 February, a certain number of States have given their support to the country. This support was quickly organized and has taken, and continues to take, several forms. In particular, it took the form of arms transfers to Ukraine, or the training of some members of its armed forces in the use of certain weapons; but also the provision of intelligence. This support raises a number of questions of several kinds: political, strategic, economic, but also legal. As regards the legal aspect, it can be expressed in different ways. And looking at those aspects that are linked solely to international law, here again at least three bodies of law may be mobilized: the right to the use of force as defined by the Charter of the United Nations; the Law of Armed Conflict, the fundamental basis of which is embodied in the four Geneva Conventions of 1949 and their Additional Protocols of 1977; and the law of neutrality, as described in the Hague Conventions of 1907. None of these bodies of law provides a definitive answer. And, if it is indeed a legal answer that is sought in response to the behaviour of some States that wish to support Ukrainian troops so that they can dominate Russian troops, this question is in fact eminently political. Nonetheless, the purpose of this brief is to shed light on the way in which the Law of Armed Conflict approaches this question.

As indicated in its name, the Law of Armed Conflict is intended to be applied during armed conflicts and provides for obligations that must be respected by the "parties to the conflict". In order to establish its conditions of application, these expressions must therefore be defined. The texts themselves do not provide a definition. Common Article 2 of the Geneva Conventions only provides that they will apply “to all cases of declared war or of any other armed conflict which may arise between two or more of the High Contracting Parties, even if the state of war is not recognized by one of them”; it also applies “to all cases of partial or total occupation of the territory”. As for Common Article 3, it states that “[i]n the case of armed conflict not of an international character occurring in the territory of one of the High Contracting Parties, each Party to the conflict shall be bound to apply, as a minimum” a number of provisions that it then enumerates restrictively. This sets out the two situations in which the Law of Armed Conflict applies: international armed conflict, i.e. armed conflict between States as has occurred in Ukraine; and non-international armed conflict, i.e. between a State and one or more armed group(s), or between armed groups. This does not, however, say anything about the point at which a State can be considered to be a party to an armed conflict, nor about the hypotheses of participation in a pre-existing armed conflict, which is sometimes referred to as "co-belligerency" – a term that is therefore not enshrined in the Law of Armed Conflict. In the absence of explicit texts, doctrine and jurisprudence provide useful insights.

With respect to the initiation of an armed conflict between States, its classification is based on a factual assessment: as soon as one or more States use armed force against another State which has not consented to it, regardless of whether the latter replies, whatever the nature of the objects or persons targeted, and without a threshold of intensity of violence having to be crossed, the existence of an international armed conflict is confirmed.

As regards the intervention of one or more States in a pre-existing armed conflict, the situation, and the corresponding classification, when this or these State(s) intervene(s) directly in the conflict, i.e. physically through its or their own armed forces on the territory of another State and against the latter, there is no issue. Whether this intervention is carried out by land, air or sea, as soon as it materialises in the use of armed force by the intervening State(s) against the State on whose territory it intervenes, participation in the conflict is confirmed. In other words, as soon as “[m]aterially, a use of force [consisting of] a physical act directly resulting in loss of life, injury, damage or destruction to persons or objects” (our translation) may be observed, the involvement in the conflict of a State is confirmed and the quality of “party to the conflict” is established.

As for the classification in the case of an indirect intervention, i.e. an intervention which is not visible or which is not intended to be visible, the question was settled in the first case judged by the International Criminal Tribunal for the former Yugoslavia, in the context of an indirect intervention by a State in a pre-existing non-international armed conflict. In order to decide, the tribunal first had to classify the conflict, and given the support provided by the Federal Republic of Yugoslavia to the armed forces of the Bosnian Serbs, it considered that the armed conflict, apparently non-international, was in fact an international armed conflict. To that end, it has developed the criterion of “overall control”, according to which support that goes beyond the mere financing and equipping of an armed group engaged in an armed conflict, but which also involves participation in the planning and supervision of its military operations, makes it possible to consider that through this indirect intervention the supporting state is itself engaged in the armed conflict. On the other hand, the court does not require that this control extends to the issuing of specific orders or instructions concerning precise military actions.

• financing, equipping, for example through arms transfers, providing intelligence or training armed forces other than its own; or

• the fact that individuals who are nationals of that State join the armed forces of another State, or directly take part in hostilities, in their personal capacity,

do not make it possible to conclude that a State may be considered as a “party to an international armed conflict”, and therefore as a “co-belligerent”,within the meaning of the Law of Armed Conflict.

However, the following would make it possible for a State to enter into armed conflict:

• any direct military engagement in hostilities in a collective manner, i.e. as a result of a decision taken by the organs of the State

• any indirect military engagement that would consist of taking part in the planning and supervision of military operations of another State; or

As underlined at the outset, these conclusions are only useful to clarify the conditions of application of the Law of Armed Conflict. They make it possible to determine the obligations to which States are subject in the conduct of hostilities and when individuals fall into their power. They do not, therefore, predetermine what conclusions might be reached as to the lawfulness of such support with regard to the right to use force or to a possible breach of neutrality. On these questions one can usefully refer to this analysis in connection with the conflict in Ukraine.

Despite the persistence of a certain vagueness about what “co-belligerence” means and implies, which in addition may be understood from several different angles in International Law, it should be borne in mind that the support provided by a large number of States to Ukraine, particularly through arms transfers or economic support – and even though this support is increasing – is not such as to make these States parties to its armed conflict with Russia.

N.B. Between the publication of this brief, which is a translation of a brief published in French on May 6, 2022, Michael Schmitt has published a complement blog post to the one mentioned above, in which he explores the conditions under which providing intelligence might amount to crossing the threshold of taking part in an armed conflict. This blog post is accessible here: https://lieber.westpoint.edu/are-we-at-war/.

Associate Professor of the Faculty of Law at Laval University (Canada), Julia Grignon holds a Ph.D from the University of Geneva (Switzerland). She is research fellow in the Law of Armed Conflict at IRSEM.