Strategic Brief no. 36 - 2022 - Interpreting the Emirati and Saudi Refusal to Side with the “West” on The War in Ukraine

Accueil - IRSEM > Publications > Brèves stratégiques / Strategic Briefs > Strategic Brief no. 36 - 2022 - Interpreting the Emirati and Saudi Refusal to Side with the “West” on The War in Ukraine 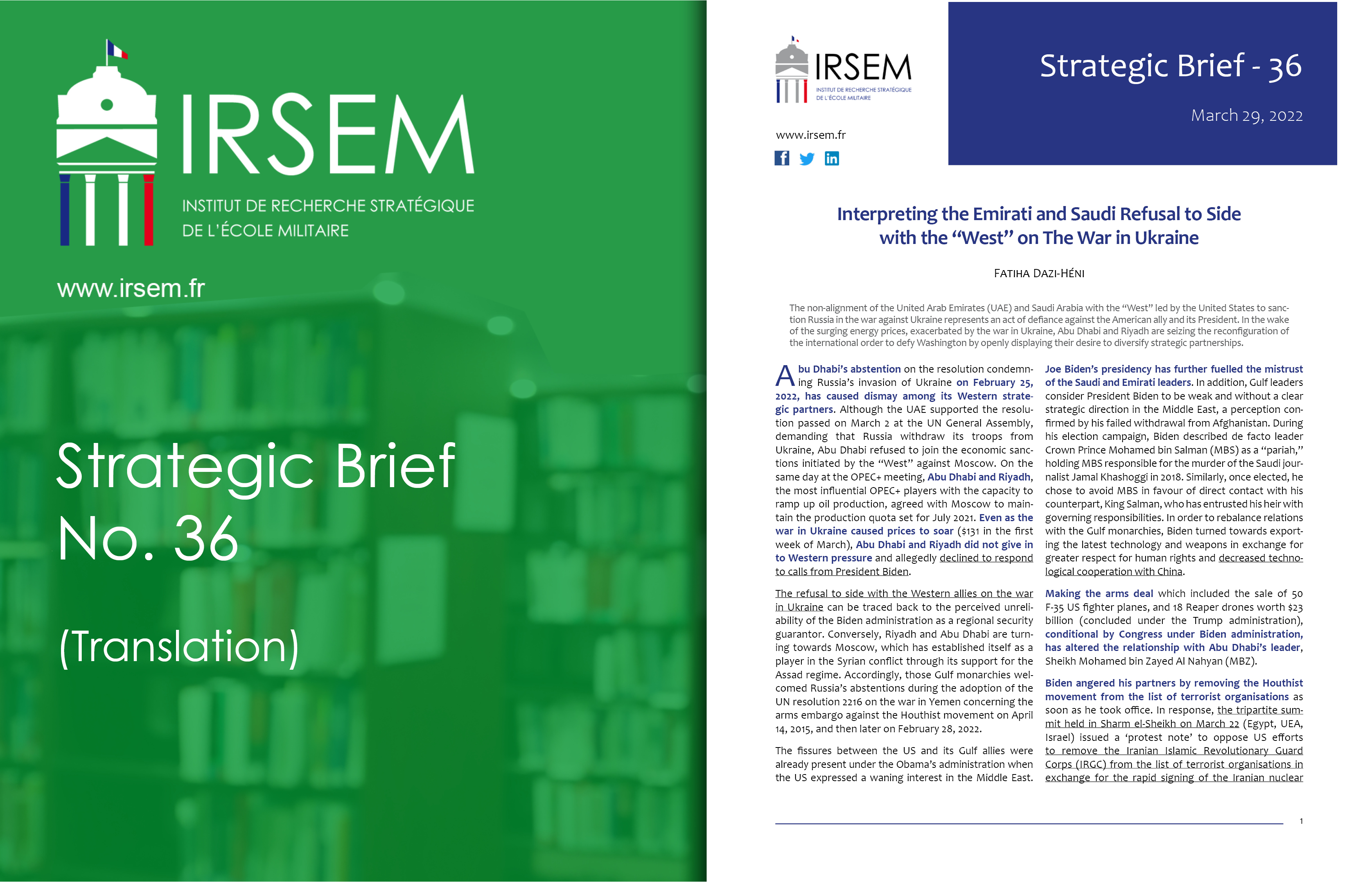 The non-alignment of the United Arab Emirates (UAE) and Saudi Arabia with the “West” led by the United States to sanction Russia in the war against Ukraine represents an act of defiance against the American ally and its President. In the wake of the surging energy prices, exacerbated by the war in Ukraine, Abu Dhabi and Riyadh are seizing the reconfiguration of the international order to defy Washington by openly displaying their desire to diversify strategic partnerships.

Abu Dhabi’s abstention on the resolution condemning Russia’s invasion of Ukraine on February 25, 2022, has caused dismay among its Western strategic partners. Although the UAE supported the resolution passed on March 2 at the UN General Assembly, demanding that Russia withdraw its troops from Ukraine, Abu Dhabi refused to join the economic sanctions initiated by the “West” against Moscow. On the same day at the OPEC+ meeting, Abu Dhabi and Riyadh, the most influential OPEC+ players with the capacity to ramp up oil production, agreed with Moscow to maintain the production quota set for July 2021. Even as the war in Ukraine caused prices to soar ($131 in the first week of March), Abu Dhabi and Riyadh did not give in to Western pressure and allegedly declined to respond to calls from President Biden.

The refusal to side with the Western allies on the war in Ukraine can be traced back to the perceived unreliability of the Biden administration as a regional security guarantor. Conversely, Riyadh and Abu Dhabi are turning towards Moscow, which has established itself as a player in the Syrian conflict through its support for the Assad regime. Accordingly, those Gulf monarchies welcomed Russia’s abstentions during the adoption of the UN resolution 2216 on the war in Yemen concerning the arms embargo against the Houthist movement on April 14, 2015, and then later on February 28, 2022.

The fissures between the US and its Gulf allies were already present under the Obama’s administration when the US expressed a waning interest in the Middle East. Joe Biden’s presidency has further fuelled the mistrust of the Saudi and Emirati leaders. In addition, Gulf leaders consider President Biden to be weak and without a clear strategic direction in the Middle East, a perception confirmed by his failed withdrawal from Afghanistan. During his election campaign, Biden described de facto leader Crown Prince Mohamed bin Salman (MBS) as a “pariah,” holding MBS responsible for the murder of the Saudi journalist Jamal Khashoggi in 2018. Similarly, once elected, he chose to avoid MBS in favour of direct contact with his counterpart, King Salman, who has entrusted his heir with governing responsibilities. In order to rebalance relations with the Gulf monarchies, Biden turned towards exporting the latest technology and weapons in exchange for greater respect for human rights and decreased technological cooperation with China.

Making the arms deal which included the sale of 50 F-35 US fighter planes, and 18 Reaper drones worth $23 billion (concluded under the Trump administration), conditional by Congress under Biden administration, has altered the relationship with Abu Dhabi’s leader, Sheikh Mohamed bin Zayed Al Nahyan (MBZ).

Biden angered his partners by removing the Houthist movement from the list of terrorist organisations as soon as he took office. In response, the tripartite summit held in Sharm el-Sheikh on March 22 (Egypt, UEA, Israel) issued a ‘protest note’ to oppose US efforts to remove the Iranian Islamic Revolutionary Guard Corps (IRGC) from the list of terrorist organisations in exchange for the rapid signing of the Iranian nuclear agreement. This agreement would accelerate Iran’s return to a tense energy market and relieve the global inflationary pressure, likely weakening Western democracies with upcoming elections. Traditionally close to the Republican party on the Iranian issue, Abu Dhabi and Riyadh pressure a weakened Biden administration. They wish to see the Democratic party lose the upcoming US mid-term senatorial elections on November 8, 2022.

Personal politics already characterised the relationship between Emirati-Saudi leaders and President Biden during the Obama administration. Back then, they criticised Barack Obama for his benevolence towards the Arab revolutions known as ‘Arab spring’. Now, Gulf leaders reproach President Biden his belated support for Houthi missile and drone strikes on major Saudi petroleum facilities since January 2022. However, even former President Trump did not respond to the attacks on tankers in Fujairah and Aramco’s petrol facilities in Abqaïq in 2019. His close relations with the authoritarian Saudi and Emirati leaders were due to his populist nature and a transactional relationship.

During the Ukrainian crisis, the refusal to follow President Biden’s invitation to his Gulf allies to side with the “West” against Russia and China confirms an attitude of defiance. They were also keen to stress that this war is far from their immediate concerns and interests. The Gulf monarchies consider that concessions can only occur in conjunction with a committed US re-engagement. Moreover, they want to ensure the security and stability of the region in the face of Iranian-backed Houthist attacks.

The Gulf leaders’ growing influence in the world gives them the confidence to push for national interests. They want to capitalise on their last oil boom and count on their gas assets and powerful sovereign wealth funds to invest in the post-oil era. In his interview with The Atlantic on March 7, MBS revealed the confrontational posture he adopted toward Washington. He declared that he did not care what the American President thought of him, recommending that the President think about the interests of the US. Similarly, the announcement on March 15 that he would negotiate with Beijing to pay for oil exports in yuan reflects his desire to increase the pressure on Washington.

The continuation of the repression, i.e., the execution of 81 prisoners on March 12 in Riyadh, exemplifies this newly adopted antagonistic position of the Saudi and Emirati leaders. Correspondingly, the official visit on March 18 of President Assad to the UAE, a fervent supporter of the war initiated by Russia, allowed MBZ to accelerate the reintegration of Syria into the region against the advice of Washington.

Like other capitals in the North Africa-Middle East region, Abu Dhabi and Riyadh are becoming the Gulf’s leading critics of the West’s hypocritical stance in defending Ukraine while leaving Syria to its fate. However, on the levelof the six monarchies of the Gulf Cooperation Council (GCC), the reluctance of Abu Dhabi and Riyadh towards Washington needs to be put into perspective. Indeed, Kuwait has unambiguously condemned the Russian invasion of Ukraine, having suffered the same fate on August 2, 1990, at the hands of its Iraqi neighbour. For its part, Qatar has chosen appeasement in regional and global affairs and established itself as a soft power hub. This approach stems from its privileged relationship with the Biden administration, as America’s major non-NATO ally, having emerged from a three-and-a-half-year embargo imposed by its Saudi and Emirati neighbours. Moreover, with the sharp increase in natural gas prices, Doha envisions its gas diplomacy as a long-term alternative to supply Europe with liquefied natural gas (LNG) through agreements such as the one concluded between Berlin and Doha on March 20. Oman and Bahrain, for their part, are keeping a low profile.

The two largest economies in the Arab world now favour multipolar dynamics to counter US disengagement. Various researchers confirmed this development in interviews from December 2021 (at the Anwar Gargash Diplomatic Academy in Abu Dhabi, the B’Huth: Dubai Public Policy Research Centre, the Rasanah International Institute for Iranian Studies and the King Faisal Center for Research and Islamic Studies in Riyadh). Moreover, since 2015, many strategic multilateral partnerships have emerged in trilateral or quadrilateral formats. These include the China, Japan, South Korea and India partnership for food and energy security; the US, India and Israel technology transfer and environmental partnership; and the UAE, France and India partnership for joint naval exercises. In the same vein, Abu Dhabi has concluded another trilateral agreement with India and Israel in May 2021.

According to Cinzia Bianco, European states could find a window of opportunity for future relations by developing ambitious cooperation with the Gulf monarchies with the energy transition and a gradual phase-out of hydrocarbons. Correspondingly, the rapid surge in energy prices linked to the war in Ukraine has the potential to revaluate the European standing in the region.

Dr Fatiha Dazi-Héni is a specialist in the Gulf monarchies and the Arabian Peninsula at IRSEM.