Strategic Brief no. 35 - 2022 - War in Ukraine and the rules governing the conduct of hostilities under the Law of Armed Conflict

Accueil - IRSEM > Publications > Brèves stratégiques / Strategic Briefs > Strategic Brief no. 35 - 2022 - War in Ukraine and the rules governing the conduct of hostilities under the Law of Armed Conflict 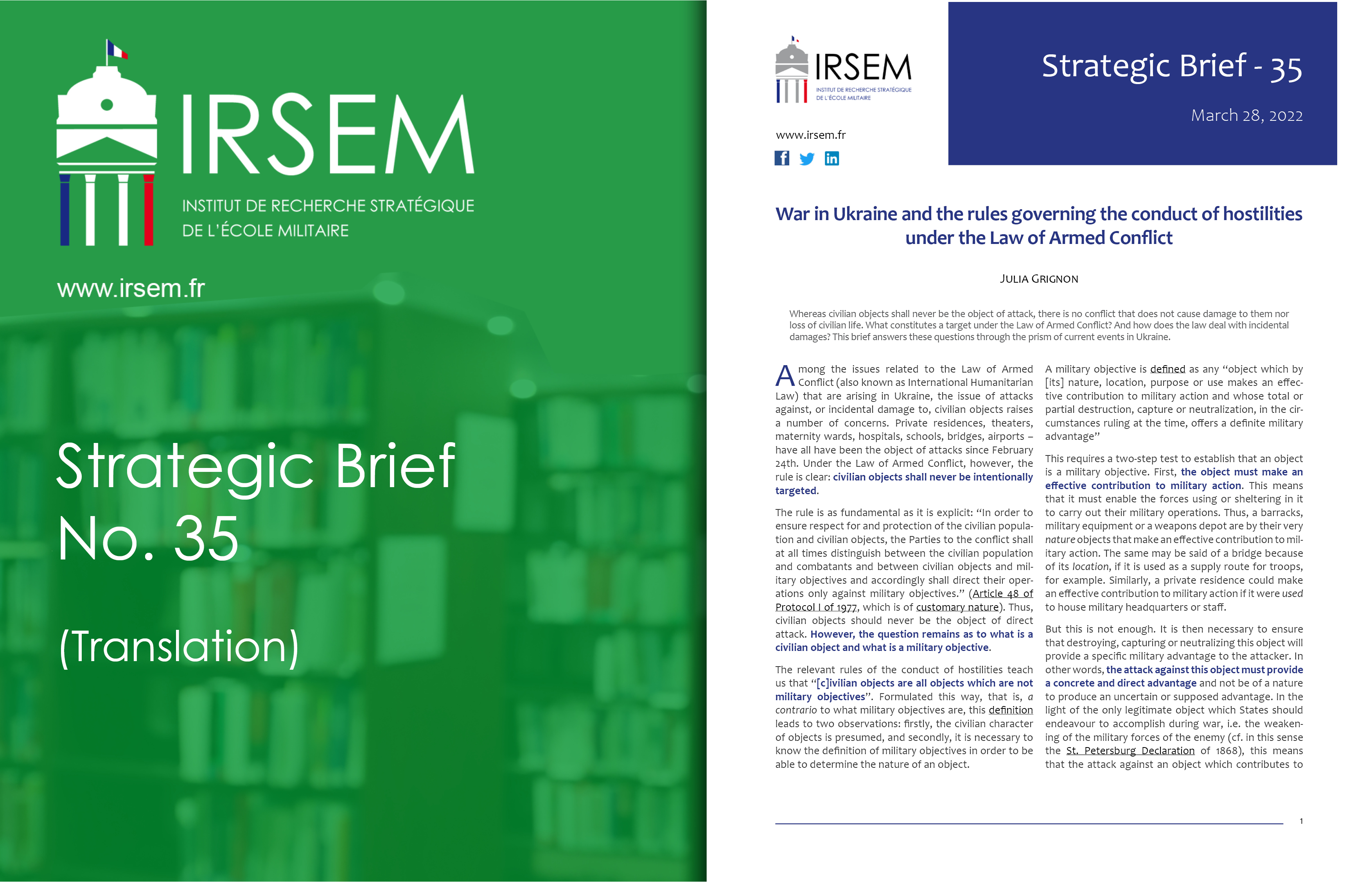 Whereas civilian objects shall never be the object of attack, there is no conflict that does not cause damage to them nor loss of civilian life. What constitutes a target under the Law of Armed Conflict? And how does the law deal with incidental damages? This brief answers these questions through the prism of current events in Ukraine.

Among the issues related to the Law of Armed Conflict (also known as International Humanitarian Law) that are arising in Ukraine, the issue of attacks against, or incidental damage to, civilian objects raises a number of concerns. Private residences, theaters, maternity wards, hospitals, schools, bridges, airports – have all have been the object of attacks since February 24th. Under the Law of Armed Conflict, however, the rule is clear: civilian objects shall never be intentionally targeted.

The relevant rules of the conduct of hostilities teach us that “[c]ivilian objects are all objects which are not military objectives”. Formulated this way, that is, a contrario to what military objectives are, this definition leads to two observations: firstly, the civilian character of objects is presumed, and secondly, it is necessary to know the definition of military objectives in order to be able to determine the nature of an object.

A military objective is defined as any “object which by [its] nature, location, purpose or use makes an effective contribution to military action and whose total or partial destruction, capture or neutralization, in the circumstances ruling at the time, offers a definite military advantage”

But this is not enough. It is then necessary to ensure that destroying, capturing or neutralizing this object will provide a specific military advantage to the attacker. In other words, the attack against this object must provide a concrete and direct advantage and not be of a nature to produce an uncertain or supposed advantage. In the light of the only legitimate object which States should endeavour to accomplish during war, i.e. the weakening of the military forces of the enemy (cf. in this sense the St. Petersburg Declaration of 1868), this means that the attack against an object which contributes to the enemy's military action is only possible if this attack makes it possible to weaken the enemy's potential.

Moreover, these elements must be assessed "in the circumstances ruling at the time", i.e. at the time when the attack is to be carried out. Therefore, to give an order to attack all the bridges in a city because they might be used at some point in the conflict to supply troops, for example, would be an illegal order. Only those bridges that are being used for this purpose at the time the attack is carried out can qualify as a military objective, and thus be attacked.

All other objects, regardless of their nature, location or use, are civilian objects. If one of the elements of this two-step test is missing, the attack should not be carried out. The same applies in case of doubt: if there is any uncertainty, the object should be considered a civilian object.

Applied to the attacks that have been reported for nearly a month on the Ukrainian territory, it appears that some of these were unquestionably conducted in contradiction of this rule,as shown by the scale of devastation in Mariupol, Kharkiv or Kherson. Moreover, hospitals, and therefore maternity wards, enjoy special protection. This protection is found in a large number of military manuals, including the Russian military manual, and derives from an old rule which has acquired customary value. According to this rule, “[m]edical units exclusively assigned to medical purposes must be respected and protected in all circumstances”, unless they are used to commit acts harmful to the enemy. More generally, even if any civilian object may become a lawful military objective, as indicated above, it is difficult to imagine that all the private residences that were attacked could have qualified as military objectives at the time they were destroyed. Finally, if the Mariupol theater did not contain armed elements, it retained its protection as a civilian object, consequently the rule of distinction was violated and the theater should not have been bombed.

This observation calls for the application of a second cardinal rule of the Law of Armed Conflict: the rule relating to proportionality in attack. Indeed, if an object qualifies as a military objective under the definition detailed above, the attack must still be carried out in accordance with this rule, which amounts to not planning, to interrupting or to cancelling any attack which may “cause incidental loss of civilian life, injury to civilians, damage to civilian objects, or a combination thereof, which would be excessive in relation to the concrete and direct military advantage anticipated”. In other words, if one or more apartments in a private residence have housed the headquarters of some armed forces, they may be attacked, provided that it has been ascertained that it will cause the least possible damage to the population or to surrounding civilian objects. Coupled with the third fundamental rule of the conduct of hostilities, according to which the parties to the conflict must in particular “take all feasible precautions in the choice of means and methods of attack with a view to avoiding, and in any event to minimizing, incidental loss of civilian life, […] and damage to civilian objects”, this means that if these apartments may be destroyed, a method that targets only these apartments, not the entire residence, should be chosen. Alternatively or in complement, it could be decided to first evacuate the residents or to warn them of an impending attack before launching it.

Ultimately, not all damage to civilian objects is prohibited by the Law of Armed Conflict. If the rules of distinction, proportionality and precautions are properly observed, it is perfectly possible, and indeed common in armed conflicts, for civilians or civilian objects to suffer losses or damages. However, the extent of reported destruction in some areas of the Ukrainian territory suggests that there is little doubt that these rules are repeatedly being violated, and that these violations amount to war crimes.

Associate Professor of the Faculty of Law at Laval University (Canada), Julia Grignon holds a Ph.D from the University of Geneva (Switzerland). She is research fellow in the Law of Armed Conflict at IRSEM.