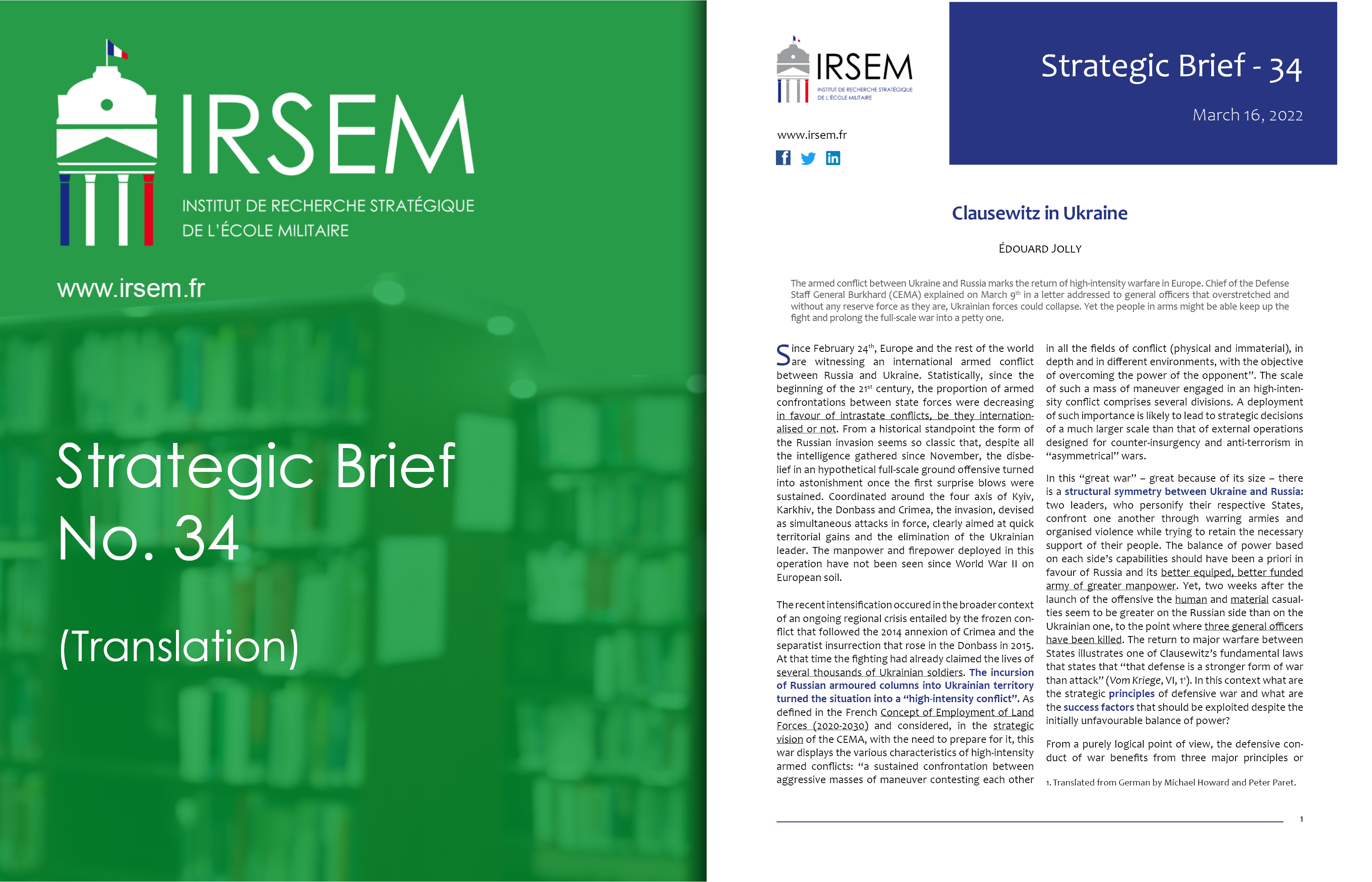 The armed conflict between Ukraine and Russia marks the return of high-intensity warfare in Europe. Chief of the Defense Staff General Burkhard (CEMA) explained on March 9th in a letter addressed to general officers that overstretched and without any reserve force as they are, Ukrainian forces could collapse. Yet the people in arms might be able keep up the fight and prolong the full-scale war into a petty one.

Since February 24th, Europe and the rest of the world are witnessing an international armed conflict between Russia and Ukraine. Statistically, since the beginning of the 21st century, the proportion of armed confrontations between state forces were decreasing in favour of intrastate conflicts, be they internationalised or not. From a historical standpoint the form of the Russian invasion seems so classic that, despite all the intelligence gathered since November, the disbelief in an hypothetical full-scale ground offensive turned into astonishment once the first surprise blows were sustained. Coordinated around the four axis of Kyiv, Karkhiv, the Donbass and Crimea, the invasion, devised as simultaneous attacks in force, clearly aimed at quick territorial gains and the elimination of the Ukrainian leader. The manpower and firepower deployed in this operation have not been seen since World War II on European soil.

The recent intensification occured in the broader context of an ongoing regional crisis entailed by the frozen conflict that followed the 2014 annexion of Crimea and the separatist insurrection that rose in the Donbass in 2015. At that time the fighting had already claimed the lives of several thousands of Ukrainian soldiers. The incursion of Russian armoured columns into Ukrainian territory turned the situation into a “high-intensity conflict”. As defined in the French Concept of Employment of Land Forces (2020-2030) and considered, in the strategic vision of the CEMA, with the need to prepare for it, this war displays the various characteristics of high-intensity armed conflicts: “a sustained confrontation between aggressive masses of maneuver contesting each other in all the fields of conflict (physical and immaterial), in depth and in different environments, with the objective of overcoming the power of the opponent”. The scale of such a mass of maneuver engaged in an high-intensity conflict comprises several divisions. A deployment of such importance is likely to lead to strategic decisions of a much larger scale than that of external operations designed for counter-insurgency and anti-terrorism in “asymmetrical” wars.

In this “great war” – great because of its size – there is a structural symmetry between Ukraine and Russia: two leaders, who personify their respective States, confront one another through warring armies and organised violence while trying to retain the necessary support of their people. The balance of power based on each side’s capabilities should have been a priori in favour of Russia and its better equiped, better funded army of greater manpower. Yet, two weeks after the launch of the offensive the human and material casualties seem to be greater on the Russian side than on the Ukrainian one, to the point where three general officers have been killed. The return to major warfare between States illustrates one of Clausewitz’s fundamental laws that states that “that defense is a stronger form of war than attack” (Vom Kriege, VI, 1[1]). In this context what are the strategic principles of defensive war and what are the success factors that should be exploited despite the initially unfavourable balance of power?

From a purely logical point of view, the defensive conduct of war benefits from three major principles or advantages. First, the doublefold defensive objective of territory conservation and protection of the living forces is less difficult to maintain than that of the offensive, made of conquest and destruction. Hence defensive conduct of war does not need to defeat the opponent power as much as it needs to thwart its attempts at achieving its objectives. Defence is first and foremost about resistance. Then, given that any attack tends to weaken over time, duration is on the defender’s side. Defence does not just require eluding or countering attacks but rather should turn the wait into opportunity. The temporality of strategic defence means responding to speed with patience. Lastly, the defender benefit from their positionning by choosing to fight on complex ground so as to level the assymetrical balance of power and increase their chances of victory. Tactically speaking, the defensive use of forests, swamps and mountains of Clausewitz’s time is now translated into mobile defence and defensive attrition warfare in urban areas, which may one day include combat in “megacities”.

The main factors for strategical success in the conduct of defensive war are surprise, a better knowledge of the terrain, sequenced assaults, the use of fortified places, popular support and the exploitation of moral forces (Vom Kriege, VI, 3). A strategical surprise can be the deployment of more forces and resistance than what the attacker expected. Tactically speaking, this amounts to favoring stunts, by ambush, by staking out, screening to the flanks and disorganizing the enemy, while inflicting maximum losses. Familiarity with the terrain facilitates reconnaissance operations as much as it favors the anticipation of the actions of the attacker, who in turn benefits from the initiative. In its tactical translation, familiarity with the terrain helps to reduce the ennemy’s movements thanks to countermobility missions, which makes the most of natural obstacles such as forests and swamps. In order to face an attacker’s strategy of encirclement and envelopment, which capitalises on an advantageous balance of forces, the defence is forced to scatter its troops so as to never form one unique front: against simultaneous concentric assaults, defensive warfare develops sequences of eccentric counter-attacks. The use of strongholds in contemporary warfare consists in the fortification of urban areas thanks to artificial obstacles. Popular support and use of moral forces correspond to controlled public communications which although not altogether free from propaganda end to demonstrate the illigitemacy of an assault criminalized as aggression.

Were the Ukrainian forces to be defeated, the defensive strategy would have to be prolongued into a “petty war” conducted by civil defence. The specificity of a people’s war lies in what Clausewitz called “defensive combat” (Verteidigungsgefecht) whereby fighters favour offensive tactics and must always avoid being forced into a tactical defensive position by their ennemy. “Defensive combat” is limited to quick attacks that must never be fixed by the ennemy or forced to commit to the static defense of an area. Defensive combat is based upon one guerilla principle that holds true no matter the context: it is combat without battle. The practitioner of this art must make himself a master of war by remaining under the threshold of battle. While a multitude of different weapons are in use in the Ukrainian theatre of war, strategic defence demonstrates the tactical importance of Bayraktar TB2 drones, anti-tank missiles (NLAW, Javelin, Panzerfaust) and anti-aircraft missiles but also of all the means already in use during the first phase of the conflict in 2014-2015.

“A government must never assume that its country’s fate, its whole existence, hangs on the outcome of a single battle, no matter how decisive. Even after a defeat, there is always the possibility that a turn of fortune can be brought about by developing new sources of internal strength or through the natural decimation all offensives suffer in the long run or by means of help from abroad. There will always be time enough to die; like a drowning man who will clutch instinctively at a straw, it is the natural law of the moral world that a nation that finds itself on the brink of an abyss will try to save itself by any means.” (Vom Kriege VI, 26).

Édouard Jolly is researcher in armed conflict theory and philosophy of war at the IRSEM.

[1] Translated from German by Michael Howard and Peter Paret.