What Strategic Implications for Europe? 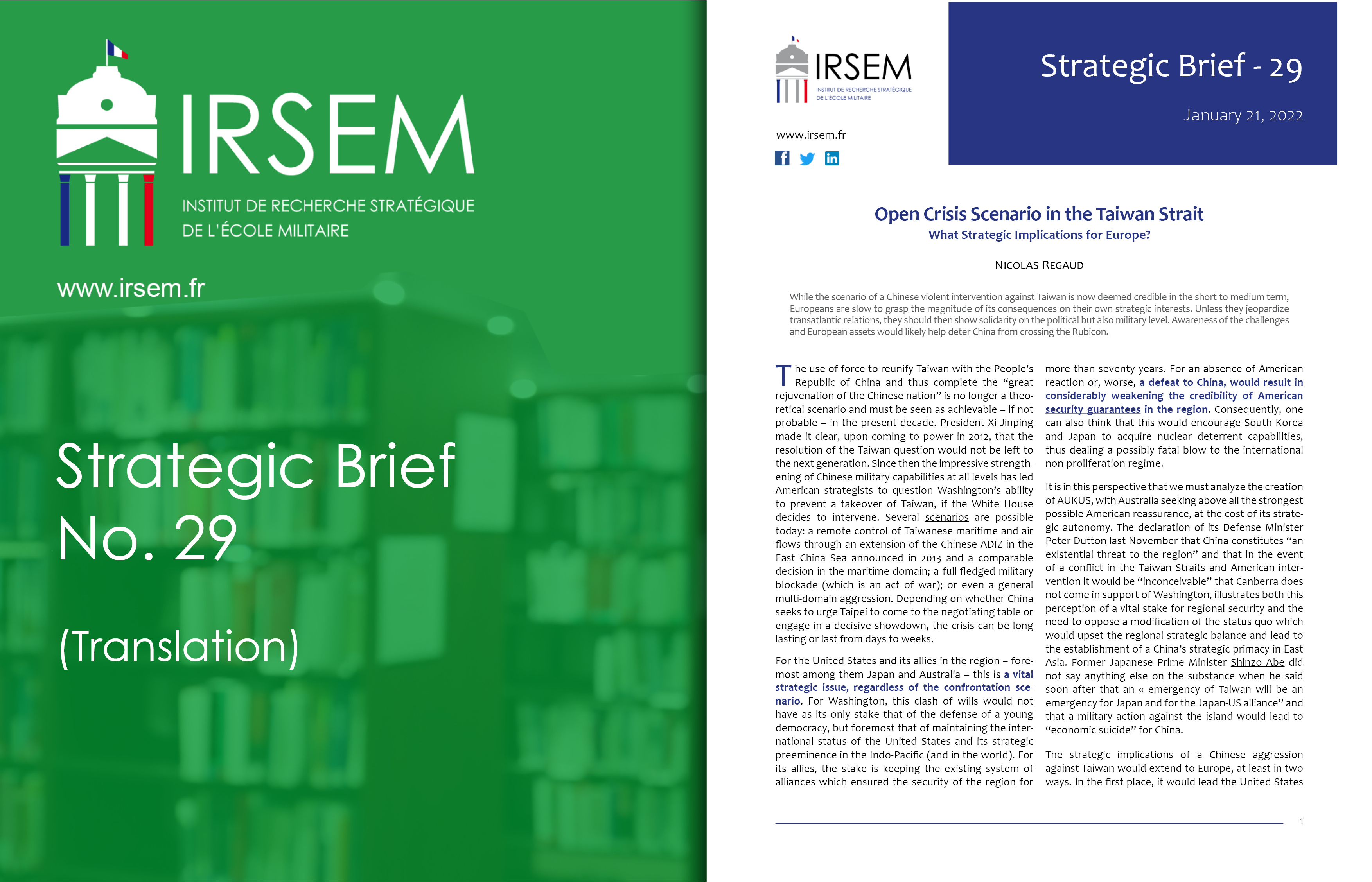 Open Crisis Scenario in the Taiwan Strait:  What Strategic Implications for Europe?

While the scenario of a Chinese violent intervention against Taiwan is now deemed credible in the short to medium term, Europeans are slow to grasp the magnitude of its consequences on their own strategic interests. Unless they jeopardize transatlantic relations, they should then show solidarity on the political but also military level. Awareness of the challenges and European assets would likely help deter China from crossing the Rubicon.

The use of force to reunify Taiwan with the People’s Republic of China and thus complete the "great rejuvenation of the Chinese nation" is no longer a theoretical scenario and must be seen as achievable – if not probable – in the present decade. President Xi Jinping made it clear, upon coming to power in 2012, that the resolution of the Taiwan question would not be left to the next generation. Since then the impressive strengthening of Chinese military capabilities at all levels has led American strategists to question Washington’s ability to prevent a takeover of Taiwan, if the White House decides to intervene. Several scenarios are possible today: a remote control of Taiwanese maritime and air flows through an extension of the Chinese ADIZ in the East China Sea announced in 2013 and a comparable decision in the maritime domain; a full-fledged military blockade (which is an act of war); or even a general multi-domain aggression. Depending on whether China seeks to urge Taipei to come to the negotiating table or engage in a decisive showdown, the crisis can be long lasting or last from days to weeks.

For the United States and its allies in the region – foremost among them Japan and Australia – this is a vital strategic issue, regardless of the confrontation scenario. For Washington, this clash of wills would not have as its only stake that of the defense of a young democracy, but foremost that of maintaining the international status of the United States and its strategic preeminence in the Indo-Pacific (and in the world). For its allies, the stake is keeping the existing system of alliances which ensured the security of the region for more than seventy years. For an absence of American reaction or, worse, a defeat to China, would result in considerably weakening the credibility of American security guarantees in the region. Consequently, one can also think that this would encourage South Korea and Japan to acquire nuclear deterrent capabilities, thus dealing a possibly fatal blow to the international non-proliferation regime.

It is in this perspective that we must analyze the creation of AUKUS, with Australia seeking above all the strongest possible American reassurance, at the cost of its strategic autonomy. The declaration of its Defense Minister Peter Dutton last November that China constitutes "an existential threat to the region" and that in the event of a conflict in the Taiwan Straits and American intervention it would be "inconceivable" that Canberra does not come in support of Washington, illustrates both this perception of a vital stake for regional security and the need to oppose a modification of the status quo which would upset the regional strategic balance and lead to the establishment of a China’s strategic primacy in East Asia. Former Japanese Prime Minister Shinzo Abe did not say anything else on the substance when he said soon after that an « emergency of Taiwan will be an emergency for Japan and for the Japan-US alliance" and that a military action against the island would lead to “economic suicide” for China.

The strategic implications of a Chinese aggression against Taiwan would extend to Europe, at least in two ways. In the first place, it would lead the United States to appeal to the solidarity of its European allies. In this context, a possible European lack of unity or a political – even military – response which would not be up to the stakes for Washington (incomparably higher than they were during the Vietnam or Afghanistan wars) would likely seriously affect transatlantic relations, or even call into question the American strategic commitment in Europe. Second, if Washington failed to prevent the fall of Taiwan, the blow to the credibility of US security guarantees would affect Asia-Pacific allies just as much as those on the European continent. In such a disastrous scenario, and if we accept the hypothesis of a consequent risk of proliferation and of jeopardizing the international non-proliferation regime, it is above all the Europeans who risk suffering. One may think in particular of a possible domino effects of nuclear proliferation in countries on the southern periphery of Europe and which are suspected or have already openly expressed their nuclear ambitions (Saudi Arabia, Egypt, Iran, Turkey).

The strategic consequences of a European unability to take sides or of a cautiously wait-and-see position taking refuge behind diplomatic calls for a political solution to the conflict would, from a strategic point of view, be incomparably higher than the price to pay for a political – and military to a certain extent – commitment against the Chinese aggression which would naturally provoke reprisals from Beijing on the political, economic and cyber level in particular. Awareness among Europeans of the multiplicity and severity of the implications of an open crisis scenario in the Taiwan Straits is essential. It should go hand in hand with the objectification of the potential political and military contribution of Europeans to prevent the occurrence of a major crisis and of its most negative strategic consequences for European interests. While it is unlikely that the Europeans will be able to practice preventive strategic communication as strong as that of Joe Biden, Peter Dutton and Shinzo Abe in recent months to signal to Beijing their determination to intervene militarily in case of Chinese aggression, we can nevertheless imagine that they could make strategic signaling on their potential reaction – political but also military.

If the Europeans have limited means of military projection – mainly French and British (aircraft carriers, SSN, Rafale, Eurofighter, MRTT, frigates – unlikely to be engaged in the Far East, they could play a very significant role in the peripheral theaters that American forces would be forced to leave to concentrate in East Asia. Particularly in the Indian Ocean, Europeans could play a major role in terms of protection, control or denial of maritime and digital data flows (submarine cables), as part of an offshore control strategy in response to a Chinese aggression posing a comparable threat to flows in East Asia. As for the French overseas territories in the Pacific and Indian Oceans, they could prove useful as part of a long-lasting crisis management. Finally, Europe could constitute a "safe rear" in terms of supplies of all types, in a context of serious disruption of trade flows with East Asia and of the global financial crisis that a such a major conflict would provoke.

The Europeans also have valuable satellite intelligence and communication capabilities and cyber capabilities likely to contribute to the necessary redundancy of American resources. In the Indian Ocean, they could prove useful as part of a long-term crisis maneuver. Finally, Europe could constitute a "safe rear" in terms of supplies of all types, in a context of serious disruption of trade flows with East Asia and of the global financial crisis that a major conflict would provoke.

Military capabilities, the credibility of their use and strategic communication constitute the three pillars of a deterrence policy. As far as communication is concerned, this usually takes place discreetly or indirectly, notably through military exercises. The engagement of scenario/planning exercises within NATO but also the European Union – which the Strategic Compass should enable – could increase awareness of the major strategic implications of an open crisis in the Taiwan Straits and lead to the development of contingency plans. A dynamic implementation of the European strategy in the Indo-Pacific – in particular a Coordinated maritime presence in the Indian Ocean – and the opening of strategic consultations on Taiwan with the United States would make it possible to give credibility to the strategic role of Europeans in the event of conflict. Such an approach would help to make Beijing aware of its isolation or at least of the global consequences of a strategic bet based on the idea of ​​a division of the West, of a pusillanimity or impotence of the Europeans, and an under-estimation of its own vulnerabilities.

Nicolas Regaud is a researcher at IRSEM. Doctor of political science, his work focuses in particular on strategic issues in the Indo-Pacific and climate security.