Strategic Brief No. 20 - 2021 - Japan's ambition for an economic security strategy: a way forward 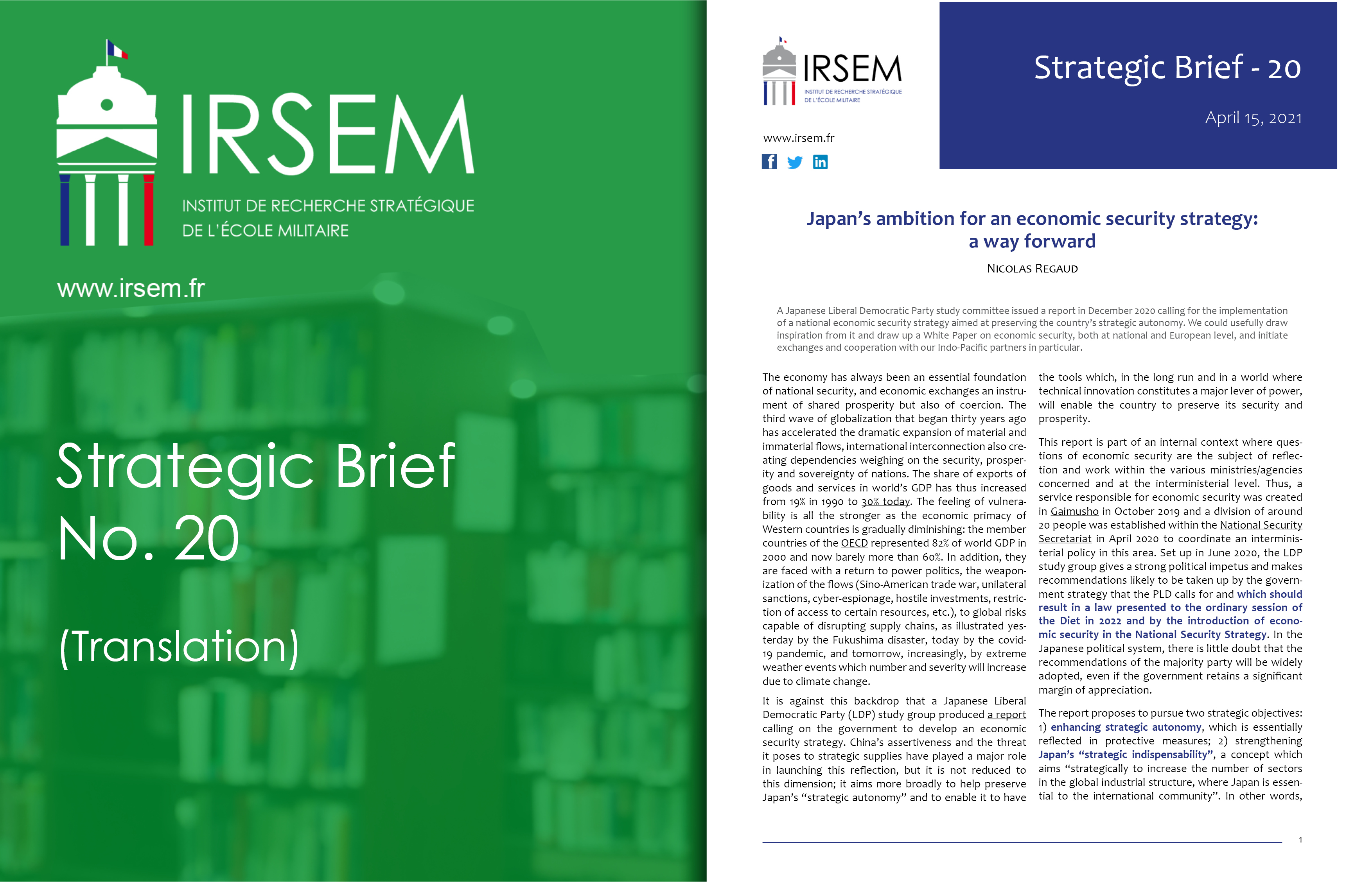 Japan's ambition for an economic security strategy: a way forward

A Japanese Liberal Democratic Party study committee issued a report in December 2020 calling for the implementation of a national economic security strategy aimed at preserving the country’s strategic autonomy. We could usefully draw inspiration from it and draw up a White Paper on economic security, both at national and European level, and initiate exchanges and cooperation with our Indo-Pacific partners in particular.

The economy has always been an essential foundation of national security, and economic exchanges an instrument of shared prosperity but also of coercion. The third wave of globalization that began thirty years ago has accelerated the dramatic expansion of material and immaterial flows, international interconnection also creating dependencies weighing on the security, prosperity and sovereignty of nations. The share of exports of goods and services in world’s GDP has thus increased from 19% in 1990 to 30% today. The feeling of vulnerability is all the stronger as the economic primacy of Western countries is gradually diminishing: the member countries of the OECD represented 82% of world GDP in 2000 and now barely more than 60%. In addition, they are faced with a return to power politics, the weaponization of the flows (Sino-American trade war, unilateral sanctions, cyber-espionage, hostile investments, restriction of access to certain resources, etc.), to global risks capable of disrupting supply chains, as illustrated yesterday by the Fukushima disaster, today by the covid-19 pandemic, and tomorrow, increasingly, by extreme weather events which number and severity will increase due to climate change.

It is against this backdrop that a Japanese Liberal Democratic Party (LDP) study group produced a report calling on the government to develop an economic security strategy. China’s assertiveness and the threat it poses to strategic supplies have played a major role in launching this reflection, but it is not reduced to this dimension; it aims more broadly to help preserve Japan's “strategic autonomy” and to enable it to have the tools which, in the long run and in a world where technical innovation constitutes a major lever of power, will enable the country to preserve its security and prosperity.

This report is part of an internal context where questions of economic security are the subject of reflection and work within the various ministries/agencies concerned and at the interministerial level. Thus, a service responsible for economic security was created in Gaimusho in October 2019 and a division of around 20 people was established within the National Security Secretariat in April 2020 to coordinate an interministerial policy in this area. Set up in June 2020, the LDP study group gives a strong political impetus and makes recommendations likely to be taken up by the government strategy that the PLD calls for and which should result in a law presented to the ordinary session of the Diet in 2022 and by the introduction of economic security in the National Security Strategy. In the Japanese political system, there is little doubt that the recommendations of the majority party will be widely adopted, even if the government retains a significant margin of appreciation.

The report proposes to pursue two strategic objectives: 1) enhancing strategic autonomy, which is essentially reflected in protective measures; 2) strengthening Japan's “strategic indispensability”, a concept which aims “strategically to increase the number of sectors in the global industrial structure, where Japan is essential to the international community”. In other words, Japan's technological and industrial positioning must contribute to its long-term security and prosperity; similarly, the consolidation of comparative advantages should enable it to deter or respond to possible actions of economic coercion, as Japan suffered in 2010 when China halted its exports of rare earth minerals.

The report recalls that Japan has for a long time implemented economic security policies, particularly in food and energy matters or in the control of sensitive transfers – foreign investments, exports of dual-use goods and military equipment, international technical and scientific exchanges – or cybersecurity, but now considers it necessary to strengthen and place all these control and protection measures within the framework of a global strategy. To do this, it recommends first carrying out work to identify key economic sectors, their vulnerabilities, segments where Japan has a comparative advantage at the international level. This should make it possible to consider adaptation measures (storage, diversification of supply sources, support for national production, identification of alternative technologies or products) in strengthening instruments for the protection of the national scientific and technical potential and a pro-innovation policy.

The report identifies a number of strategic sectors requiring special attention and an effort in terms of support to innovation, including the maritime economy (marine resources, shipbuilding, arctic policy), telecommunications infrastructures (sub-cables, 6G), financial infrastructures (digital currency), data control, artificial intelligence, quantum technologies, space, biotechnologies, materials and environmental technologies. The field is therefore very wide and is the responsibility of a large number of public and private actors, which leads the report to recommend an inter-ministerial approach, associating the private sector and the academia. Finally, he insists on the need for strengthening national capacities for economic intelligence, for consultation with like-minded countries – in particular “the United States, Australia, India, other countries of the Indo-Pacific region and Europe”, and assistance to third countries, in particular those of the Indo-Pacific.

Therefore, Japan should – from 2022 – be the first large developed country to have a real economic security strategy, even if this theme constitutes the second pillar of the American NSS adopted in 2017. France, like its major partners, has also strengthened its sensitive transfer control mechanisms in recent years (extension of the scope of sectors subject to foreign investment control, creation of the Strategic Information and Economic Security Service, updating of the Policy for the protection of the scientific and technical potential, etc.), developed a cyber defense and cybersecurity strategy, and is committed to supporting innovation in certain key areas (AI, quantum technologies, etc.). However, it does not have an integrated strategy for economic security, the subject being dealt in a fragmented manner.

The Japanese example could thus lead to considering the development of such a strategy or a White Paper and – at the very least – to incorporate this dimension of national security in a future White Paper on Defense and National Security. Such an approach would take place in a national context unprecedently favorable to the strengthening of economic sovereignty. It would make it possible to specify the field of economic security and to structure an interministerial policy according to guidelines approved at the highest level, possibly by associating the private sector and civil society in the development of this strategy, as was the case for the last White papers.

An initiative in this direction would promote exchanges with our major strategic partners, in particular those in the Indo-Pacific, very sensitive to the need to develop instruments for economic resilience, as illustrated in particular by the launch in September 2020 by Japan, of the Supply Chain Resilience Initiative (SCRI) with India and Australia. France could also examine the possibility of joining this initiative, as part of its strategy in the Indo-Pacific.

Finally, a major French initiative on economic security could, as was the case when France first developed an Indo-Pacific strategy in Europe, show the way for the EU and our major partners. Some of them, like Germany and the Netherlands, have already expressed their willingness to strengthen their economic security instruments and could support the idea of ​​developing an EU economic security strategy, the most appropriate level of mobilization to weight on the world stage in this domain. This was already the central proposition of the memorandum sent to HRVP Josep Borrell in 2019 by Jean Pisani-Ferry and Guntram Wolff, which remains fully relevant.