Strategic Brief - No. 2 - 2020 - The Quest for European Medical Autonomy: The Moment of Truth for the "Geopolitical Commission" 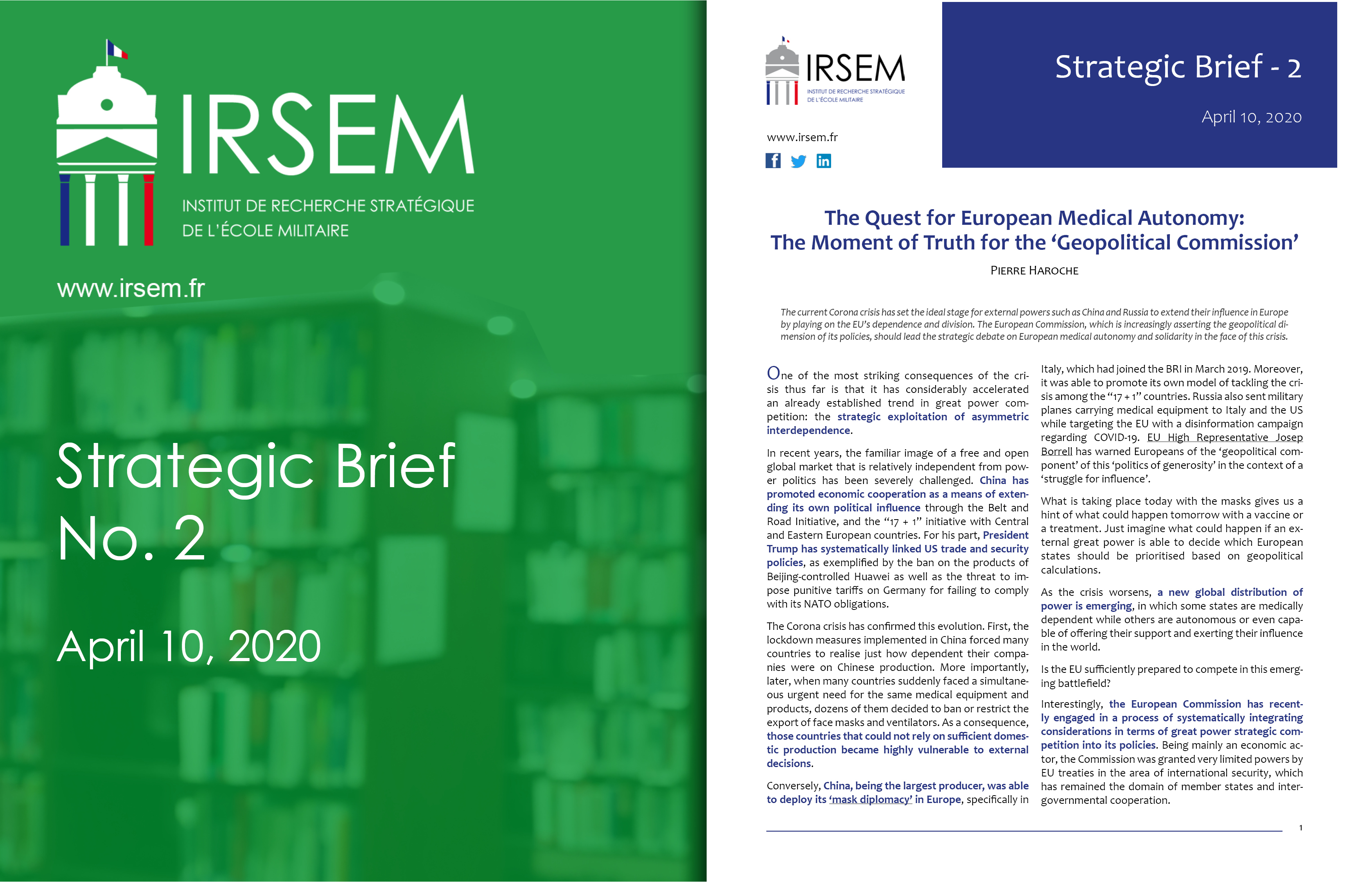 The Quest for European Medical Autonomy:
The Moment of Truth for the "Geopolitical Commission"

The current Corona crisis has set the ideal stage for external powers such as China and Russia to extend their influence in Europe by playing on the EU’s dependence and division. The European Commission, which is increasingly asserting the geopolitical dimension of its policies, should lead the strategic debate on European medical autonomy and solidarity in the face of this crisis.

One of the most striking consequences of the crisis thus far is that it has considerably accelerated an already established trend in great power competition: the strategic exploitation of asymmetric interdependence.

In recent years, the familiar image of a free and open global market that is relatively independent from power politics has been severely challenged. China has promoted economic cooperation as a means of extending its own political influence through the Belt and Road Initiative, and the “17 + 1” initiative with Central and Eastern European countries. For his part, President Trump has systematically linked US trade and security policies, as exemplified by the ban on the products of Beijing-controlled Huawei as well as the threat to impose punitive tariffs on Germany for failing to comply with its NATO obligations.

The Corona crisis has confirmed this evolution. First, the lockdown measures implemented in China forced many countries to realise just how dependent their companies were on Chinese production. More importantly, later, when many countries suddenly faced a simultaneous urgent need for the same medical equipment and products, dozens of them decided to ban or restrict the export of face masks and ventilators. As a consequence, those countries that could not rely on sufficient domestic production became highly vulnerable to external decisions.

Conversely, China, being the largest producer, was able to deploy its ‘mask diplomacy’ in Europe, specifically in Italy, which had joined the BRI in March 2019. Moreover, it was able to promote its own model of tackling the crisis among the “17 + 1” countries. Russia also sent military planes carrying medical equipment to Italy and the US while targeting the EU with a disinformation campaign regarding COVID-19. EU High Representative Josep Borrell has warned Europeans of the ‘geopolitical component’ of this ‘politics of generosity’ in the context of a ‘struggle for influence’.

What is taking place today with the masks gives us a hint of what could happen tomorrow with a vaccine or a treatment. Just imagine what could happen if an external great power is able to decide which European states should be prioritised based on geopolitical calculations.

As the crisis worsens, a new global distribution of power is emerging, in which some states are medically dependent while others are autonomous or even capable of offering their support and exerting their influence in the world.

Is the EU sufficiently prepared to compete in this emerging battlefield?

Interestingly, the European Commission has recently engaged in a process of systematically integrating considerations in terms of great power strategic competition into its policies. Being mainly an economic actor, the Commission was granted very limited powers by EU treaties in the area of international security, which has remained the domain of member states and intergovernmental cooperation.

However, with the European Defence Fund adopted in April 2019, the Commission relied on its competence in research and industry to intervene in the area of defence, with the objective of contributing to the development of Europe’s ‘strategic autonomy’. This policy has been a cause of concern for the US administration, as it fears that Europeans would eventually reduce their reliance on American military equipment. Similarly, in its March 2019 communication on EU-China relations, the Commission abandoned its traditional exclusive focus on economic interests. Instead, it called China a ‘systemic rival’ and promoted a common approach to the security of 5G networks and the screening of foreign investments based on security risks.

In other words, the Commission took advantage of a context marked by the increasing security implications of economic exchanges to emerge as a strategic actor, a development that member states had not initially anticipated.

By setting for herself the objective of leading a ‘geopolitical Commission’, President Ursula von der Leyen signalled her intention to double down on this approach. For example, the new Commission has promoted the concept of ‘technological sovereignty’, seeking to reduce the EU’s ever-growing dependence on American and Chinese tech companies.

Today’s Corona crisis is the moment of truth for the Commission’s strategic ambition.

Two main issues lie ahead. First, similar to strategic autonomy, EU medical autonomy is becoming a crucial issue. The Commission should lead the struggle to ensure that Europeans reduce their dependence on external powers for the supply of essential medical products and equipment. It should coordinate member states’ production and stockpiling efforts, as well as public investments in vaccine and treatment development. The Commission’s recent intervention to support German vaccine company CureVac, which President Trump had attempted to take control of, is a case in point.

Second, solidarity among member states is another crucial issue. After the 2008 financial crisis, the selling of key state assets to Chinese investors in countries most affected by budgetary difficulties, such as Greece and Portugal, often came as a direct response to debt restructuring programmes imposed by the EU. Since then, Greece, in particular, has on several occasions opposed EU positions that would have clashed with China’s interests, including on territorial claims in the South China Sea and on human rights violations.

In today’s crisis, allowing vulnerable member states to fall under the influence of external powers would potentially have even more deleterious consequences. The main risk is that the lack of European solidarity during the Corona crisis could eventually paralyse not only the EU but also NATO in the face of external challenges coming from China or Russia. This would severely endanger Europe’s security, considerably weaken the transatlantic partnership and destroy any idea of European strategic autonomy.

The Commission has already proposed initiatives aimed at supporting national healthcare sectors and short-time work schemes. Much more will obviously have to be done. However, it is also important for the Commission to fortify the adopted economic measures with a strong narrative, in response to Russian and Chinese campaigns, that European solidarity is not only the best solution to the crisis but also the best guarantee that Europeans will remain capable of defending their interests in the world. As the debate on Eurozone’s response to the crisis has until now exclusively focused on economic concerns, the Commission should remind member states of the strong strategic implications of their decisions.

While national governments are totally focused on the very short-term management of the crisis, the Commission has the unique opportunity to lead the debate on longer-term, but no less crucial, strategic decisions and truly become the major geopolitical actor it wishes to be.

If not now, then when?