Strategic Brief No. 18 - 2021 - “Yes to Iron Man, No to Spiderman!” A New Framework for the Enhanced Soldier brought by the Report from the Defense Ethics Committee in France

Accueil - IRSEM > Publications > Brèves stratégiques / Strategic Briefs > Strategic Brief No. 18 - 2021 - “Yes to Iron Man, No to Spiderman!” A New Framework for the Enhanced Soldier brought by the Report from the Defense Ethics Committee in France 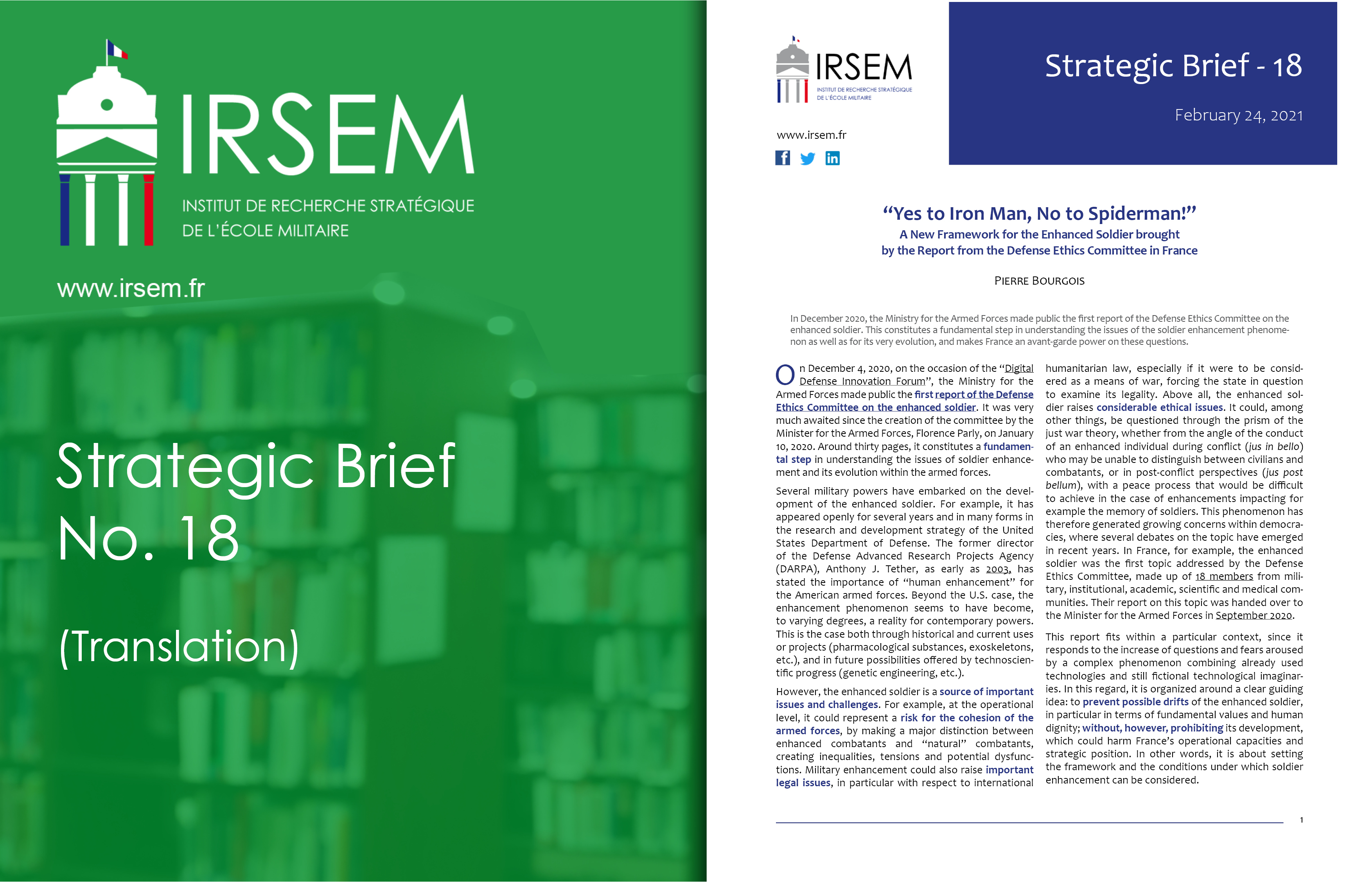 “Yes to Iron Man, No to Spiderman!” A New Framework for the Enhanced Soldier brought by the Report from the Defense Ethics Committee in France

In December 2020, the Ministry for the Armed Forces made public the first report of the Defense Ethics Committee on the enhanced soldier. This constitutes a fundamental step in understanding the issues of the soldier enhancement phenomenon as well as for its very evolution, and makes France an avant-garde power on these questions.

On December 4, 2020, on the occasion of the “Digital Defense Innovation Forum”, the Ministry for the Armed Forces made public the first report of the Defense Ethics Committee on the enhanced soldier. It was very much awaited since the creation of the committee by the Minister for the Armed Forces, Florence Parly, on January 10, 2020. Around thirty pages, it constitutes a fundamental step in understanding the issues of soldier enhancement and its evolution within the armed forces.

Several military powers have embarked on the development of the enhanced soldier. For example, it has appeared openly for several years and in many forms in the research and development strategy of the United States Department of Defense. The former director of the Defense Advanced Research Projects Agency (DARPA), Anthony J. Tether, as early as 2003, has stated the importance of “human enhancement” for the American armed forces. Beyond the U.S. case, the enhancement phenomenon seems to have become, to varying degrees, a reality for contemporary powers. This is the case both through historical and current uses or projects (pharmacological substances, exoskeletons, etc.), and in future possibilities offered by technoscientific progress (genetic engineering, etc.).

However, the enhanced soldier is a source of important issues and challenges. For example, at the operational level, it could represent a risk for the cohesion of the armed forces, by making a major distinction between enhanced combatants and “natural” combatants, creating inequalities, tensions and potential dysfunctions. Military enhancement could also raise important legal issues, in particular with respect to international humanitarian law, especially if it were to be considered as a means of war, forcing the state in question to examine its legality. Above all, the enhanced soldier raises considerable ethical issues. It could, among other things, be questioned through the prism of the just war theory, whether from the angle of the conduct of an enhanced individual during conflict (jus in bello) who may be unable to distinguish between civilians and combatants, or in post-conflict perspectives (jus post bellum), with a peace process that would be difficult to achieve in the case of enhancements impacting for example the memory of soldiers. This phenomenon has therefore generated growing concerns within democracies, where several debates on the topic have emerged in recent years. In France, for example, the enhanced soldier was the first topic addressed by the Defense Ethics Committee, made up of 18 members from military, institutional, academic, scientific and medical communities. Their report on this topic was handed over to the Minister for the Armed Forces in September 2020.

This report fits within a particular context, since it responds to the increase of questions and fears aroused by a complex phenomenon combining already used technologies and still fictional technological imaginaries. In this regard, it is organized around a clear guiding idea: to prevent possible drifts of the enhanced soldier, in particular in terms of fundamental values and human dignity; without, however, prohibiting its development, which could harm France’s operational capacities and strategic position. In other words, it is about setting the framework and the conditions under which soldier enhancement can be considered.

The committee’s report is based on 13 guiding principles that can be assembled into three different categories. First, some principles aim to define the contours and the very object of the report. For example, emphasizing the singularity of the enhanced soldier and its status in relation to the function of the soldier, the temporality of the reflections, as well as the types of enhancements taken into account. In this respect, those that are considered in the report are enhancements that “cross the body barrier”, like “invasive” devices (implants, etc.), some preventive health practices (vaccines, etc.) or various substances (drugs, etc.).

Several principles then insist on the need for the armed forces to be able to resort to soldier enhancement. Indeed, one of the main ideas of the report is to underline the importance of not hindering research on the enhanced soldier, since it might be: strategically decisive, useful at the operational level, a positive improvement regarding the very condition of soldiers (protection, well-being, etc.), or even considered as a reflection of fundamental military values. With this in mind, the bounds of the enhanced soldier must be outlined, an element which constitutes the last main axis of the guiding principles of the report. Indeed, the document sets limits for the development and use of soldier enhancement means, that must mainly be in accordance with the various regulations and frameworks surrounding the status, obligations and means of action of the military and international law. They also have to respect the rules of medical ethics, the recommendations from the military health service and those from the committee for the protection of persons (CPP). Finally, the process must be in accordance with the principle of respect for the (physical or mental) health of soldiers and more broadly, for human dignity.

In addition to the 13 principles, there are also 17 recommendations that can be divided into three main groups. Some of them aim to define the conditions for the study and the development of the means of enhancement. For example, the committee recommends military decision-makers make a detailed assessment of how various enhancements impact the health of soldiers. It also underlines the need to present an analysis of the associated benefits and risks and a systematic comparison with alternative solutions. Finally, it recommends to make a presentation – in the form of a doctrine of use – of the purposes, conditions to use it, expectations and responsibilities involved or, if necessary, an examination of the legality of the means of enhancement (whose reversible nature must be constantly researched). Some recommendations are related to the conditions of the enhancement’s use. Thus, the committee underlines the need to have a special medical team monitoring soldiers in preparation for a possible enhancement (analysis of profiles, tolerance to the device, etc.), to support (physically and psychologically) the enhanced individual and to ensure one’s integration and place within the group. It also recommends to provide the soldier with explicit, traceable and monitored information on the risks incurred and above all, except for justified and explained exceptions, to obtain one’s systematic consent. In this regard, the assistance of the military health service is recommended by the authority at all stages of the enhancement process.

Finally, some recommendations define the “red lines” that must never be crossed. The committee clearly indicates the enhancements that must be the subject to a strict refusal by the armed forces, namely those affecting the control of the use of force, the feeling of humanity, the principle of human dignity, the capacity of free will of the military, one’s respect for disciplinary obligations, one’s adaptation to civil society (during or after his career) as well as those enhancements based on genetic engineering and those that have not been subject of extensive research on their impacts and any adverse effects.

Ultimately, this report constitutes a key step for the topic of the enhanced soldier, because of the reflections it provokes but also because of the study, development, and use framework that it establishes. In this regard, it defines a clear position, namely that the armed forces must be able to enhance the physical or psycho-cerebral capacities of the soldiers, provided that it respects a precise process, clear ethical and legal rules, as well as some “red lines” that must not be crossed, such as genetic engineering. This was the meaning of the statement of Florence Parly, who introduced the report by indicating that the Ministry is saying “yes to Iron Man’s armor and no to the increase and genetic mutation of Spiderman.” Therefore, the text allows to establish a first general framework for dealing with the complexity of the military enhancement phenomenon and its ambivalent nature. If it constitutes a considerable danger for the law of armed conflicts, for military regulations, and more broadly for our conception of morality and human dignity, this phenomenon also brings new perspectives at both the operational level, regarding the protection and well-being of soldiers, as well as from a global strategic position.

With this committee and its report, France is positioned at the forefront of ethical reflections on the enhanced soldier, both in Europe and internationally, since this initiative has for the moment no equivalent among the main contemporary powers. However, it is important to remember that this document only has a consultation value, and does not constitute a binding guarantee for the future. Despite this, by establishing an update of the text approximately every ten years, the institution seems to have put this subject permanently not only at the heart of military concerns, but also of political and societal concerns. In this regard, the content of the next report will depend, at least in part, on the impact and scope of this first one.

Dr. Pierre Bourgois is a postdoctoral researcher at the IRSEM and the Montesquieu Research Institute (IRM-CMRP) of the University of Bordeaux.