Strategic Brief No. 17 - 2021 - Rising tensions in the Taiwan Strait: what are the stakes for Europe? 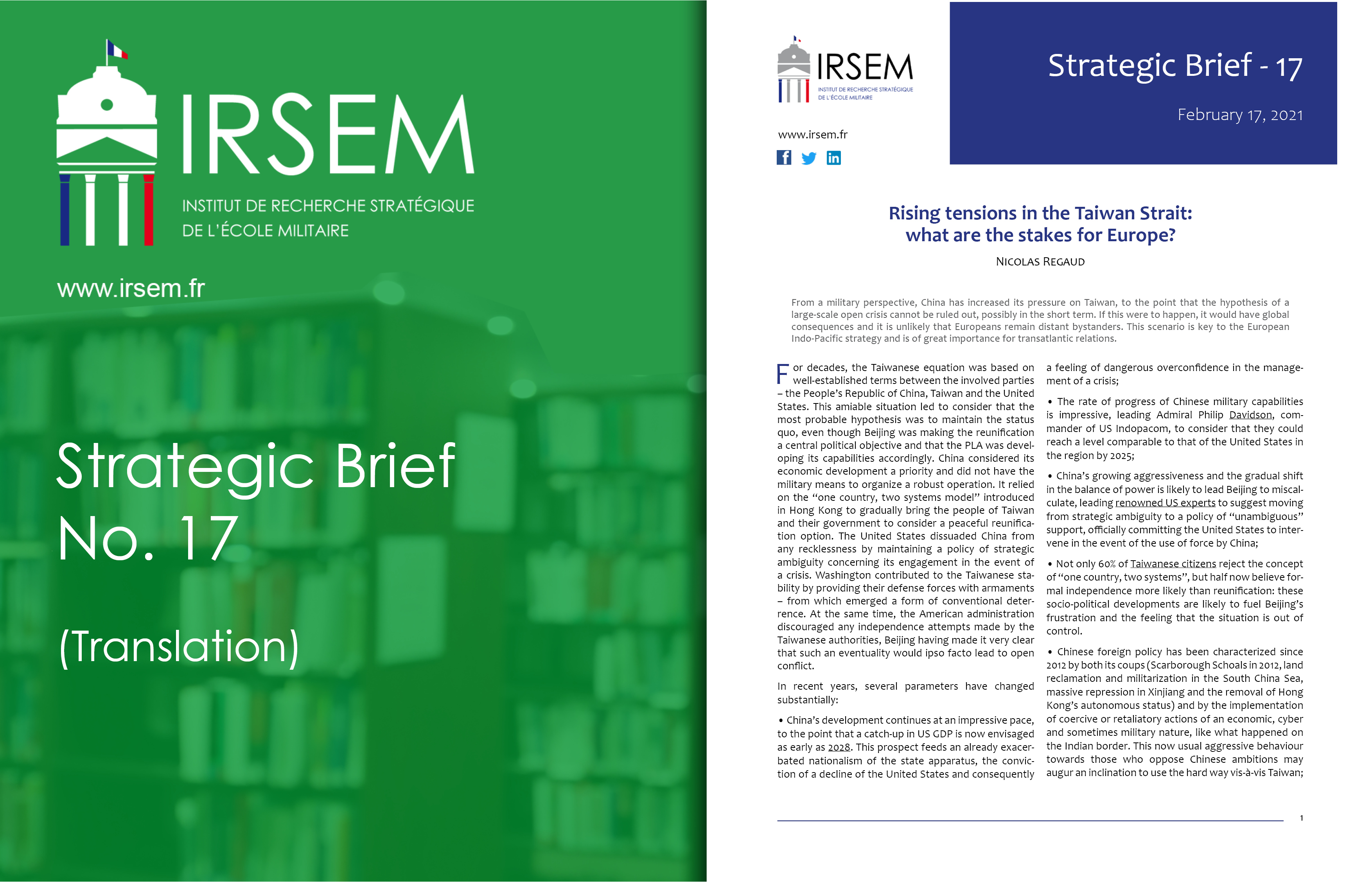 Rising tensions in the Taiwan Strait: what are the stakes for Europe?

From a military perspective, China has increased its pressure on Taiwan, to the point that the hypothesis of a large-scale open crisis cannot be ruled out, possibly in the short term. If this were to happen, it would have global consequences and it is unlikely thatEuropeans remain distant bystanders. This scenario is key to the European Indo-Pacific strategy and is of great importance for transatlantic relations.

For decades, the Taiwanese equation was based on well-established terms between the involved parties – the People’s Republic of China, Taiwan and the United States. This amiable situation led to consider that the most probable hypothesis was to maintain the status quo, even though Beijing was making the reunification a central political objective and that the PLA was developing its capabilities accordingly. China considered its economic development a priority and did not have the military means to organize a robust operation. It relied on the "one country, two systems model" introduced in Hong Kong to gradually bring the people of Taiwan and their government to consider a peaceful reunification option. The United States dissuaded China from any recklessness by maintaining a policy of strategic ambiguity concerning its engagement in the event of a crisis. Washington contributed to the Taiwanese stability by providing their defense forces with armaments – from which emerged a form of conventional deterrence. At the same time, the American administration discouraged any independence attempts made by the Taiwanese authorities, Beijing having made it very clear that such an eventuality would ipso facto lead to open conflict.

• China’s development continues at an impressive pace, to the point that a catch-up in US GDP is now envisaged as early as 2028. This prospect feeds an already exacerbated nationalism of the state apparatus, the conviction of a decline of the United States and consequently a feeling of dangerous overconfidence in the management of a crisis;

• The rate of progress of Chinese military capabilities is impressive, leading Admiral Philip Davidson, commander of US Indopacom, to consider that they could reach a level comparable to that of the United States in the region by 2025;

• China’s growing aggressiveness and the gradual shift in the balance of power is likely to lead Beijing to miscalculate, leading renowned US experts to suggest moving from strategic ambiguity to a policy of “unambiguous” support, officially committing the United States to intervene in the event of the use of force by China;

• Not only 60% of Taiwanese citizens reject the concept of "one country, two systems", but half now believe formal independence more likely than reunification: these socio-political developments are likely to fuel Beijing’s frustration and the feeling that the situation is out of control.

• Chinese foreign policy has been characterized since 2012 by both its coups (Scarborough Schoals in 2012, land reclamation and militarization in the South China Sea, massive repression in Xinjiang and the removal of Hong Kong’s autonomous status) and by the implementation of coercive or retaliatory actions of an economic, cyber and sometimes military nature, like what happened on theIndian border. This now usual aggressive behaviour towards those who oppose Chinese ambitions may augur an inclination to use the hard way vis-à-vis Taiwan;

• Recent statements by senior officials, including that of the PLA Chief of Staff, and increasing air incursions by combat aircrafts in the air defense identification zone (380 in 2020), are of bad omen and increase the risk of incidents and escalation.

Questioning which actions China might take against Taiwan is by nature highly speculative. Among these, a “filtering control” of Taiwan’s sea and air space seems militarily and politically realistic, as it remains below the threshold of an act of war. This option, which would aim to reduce the risk of American military intervention, could be supplemented by coercive electronic, cyber, economic and financial measures. Its objective would be, without resorting to lethal measures, to paralyze the country and exert Taipei to open negotiations. The range of modus operandi is vast and reflects the multi-dimensional power acquired by China. Whichever one Beijing chooses, the risks will be considerable, especially for Xi Jinping and the Communist Party in case of failure, which could contribute to an escalation of the crisis. For its part, the United States is well aware of the devastating impact the inability to prevent a coup by Chinese forces would have on its regional alliances. The breakthrough of the Asian "Fulda gap" – first islands chain – would deeply modify the regional strategic balance.

Alas, the timeframe is worsening the situation: the Trump administration has sharply increased its arms sales to Taiwan, to the tune of $15 billion (compared to $14 billion under the two Obama administrations), a policy that the Biden administration does not seem willing to question. Such a move could encourage Beijing to act preventively. Moreover, China might consider that time is no longer on its side: besides losing the "battle of hearts and minds" in Taiwan, it might want to put an end to the dynamic of continuously gaining diplomatic support, from which Taipei seems to benefit. Moreover, Western opinions are starting to be increasingly sensitive to the authoritarian nature of the Chinese regime, hence the need to support democracy.

The option of a coercive reunification is a gamble for Chinese authorities and no one seems to know when it could take place. If 2049 is too distant a horizon for Xi Jinping, in 2035 the Chinese president will still be in power (he will then be 82 years old). Unless Beijing considers the need to take advantage of the relative American weakening – focused on resolving both the health crisis and domestic political issues – and to break the international dynamic favorable to Taiwan as soon as possible (before the centenary of the CCP in July 2021 or the 20th Party Congress in the fall 2022?). However, signals of support to the Taiwanese cause have been sent by the new Biden administration and while the worst is not certain, it is far from unthinkable.

It would be illusory to imagine that an open crisis could be restricted to East Asia only. Such a conflict will have global repercussions of all kinds – political, economic, financial, cyber and military. Europe will not escape its shock waves, if only because the United States will expect unambiguous support from it, while China will instead seek to neutralize the Europeans, through threats of retaliation.

The Europeans and the United States have not adopted the same posture towards Taiwan and have a different reading of the One China policy. One can fear that the Europeans will hesitate on the way forward and will therefore react in a disorderly and pusillanimous manner. In which case, the Taiwanese question could strongly impact transatlantic solidarity – as well as Sino-European relations – as it is of major strategic importance for both the United States and China. The position Europeans are going to adopt is also decisive for the future of their relations with their Indo-Pacific partners – Japan, Australia and India.

An open crisis between the two sides of the Taiwan Strait would have direct impacts on European interests. A large European community resides in Taiwan (around 8,000 people) and they would eventually need to be evacuated, while a large volume of trade ($58 bn in 2019) and European investments ($34 bn) will risk being undermined. In this regard, the contingency planning work of the European Intervention Initiative (EII) could usefully focus on this crisis scenario. The Taiwanese problematic should appear on the agenda of high-level transatlantic exchanges that were agreed by the HRVP Josep Borrell and the previous American administration in order to consider how Europe could contribute to the prevention of a crisis whose risks of outbreak seem higher than ever.