Strategic Brief No. 15 - 2021 - China’s policy of economic coercion against Australia: what can Europeans learn from it?

Accueil - IRSEM > Publications > Brèves stratégiques / Strategic Briefs > Strategic Brief No. 15 - 2021 - China’s policy of economic coercion against Australia: what can Europeans learn from it? 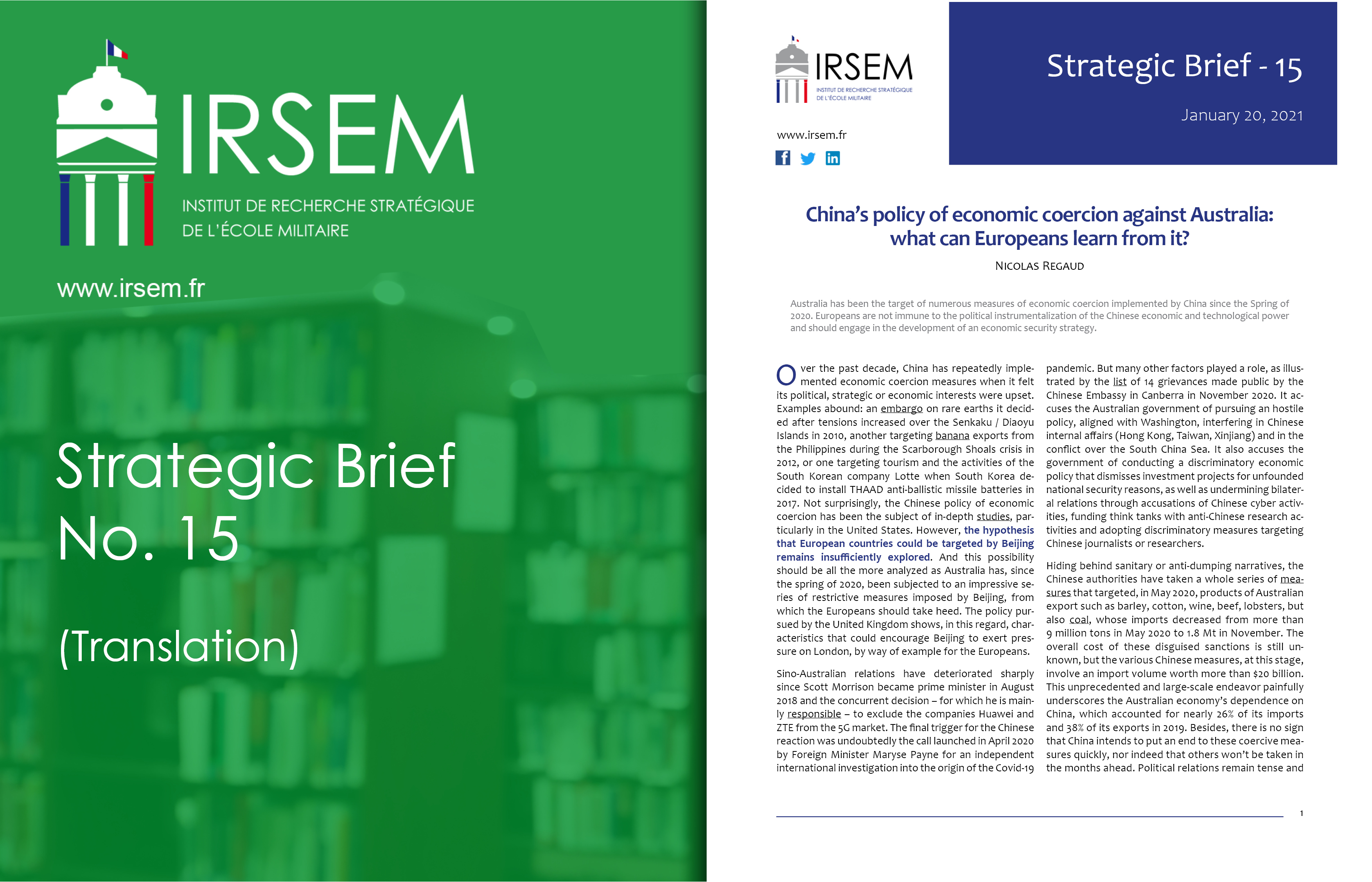 China’s policy of economic coercion against Australia:
what can Europeans learn from it?

Australia has been the target of numerous measures of economic coercion implemented by China since the Spring of 2020. Europeans are not immune to the political instrumentalization of the Chinese economic and technological power and should engage in the development of an economic security strategy.

Over the past decade, China has repeatedly implemented economic coercion measures when it felt its political, strategic or economic interests were upset. Examples abound: an embargo on rare earths it decided after tensions increased over the Senkaku / Diaoyu Islands in 2010, another targeting banana exports from the Philippines during the Scarborough Shoals crisis in 2012, or one targeting tourism and the activities of the South Korean company Lotte when South Korea decided to install THAAD anti-ballistic missile batteries in 2017. Not surprisingly, the Chinese policy of economic coercion has been the subject of in-depth studies, particularly in the United States. However, the hypothesis that European countries could be targeted by Beijing remains insufficiently explored. And this possibility should be all the more analyzed as Australia has, since the spring of 2020, been subjected to an impressive series of restrictive measures imposed by Beijing, from which the Europeans should take heed. The policy pursued by the United Kingdom shows, in this regard, characteristics that could encourage Beijing to exert pressure on London, by way of example for the Europeans.

Sino-Australian relations have deteriorated sharply since Scott Morrison became prime minister in August 2018 and the concurrent decision – for which he is mainly responsible – to exclude the companies Huawei and ZTE from the 5G market. The final trigger for the Chinese reaction was undoubtedly the call launched in April 2020 by Foreign Minister Maryse Payne for an independent international investigation into the origin of the Covid-19 pandemic. But many other factors played a role, as illustrated by the list of 14 grievances made public by the Chinese Embassy in Canberra in November 2020. It accuses the Australian government of pursuing an hostile policy, aligned with Washington, interfering in Chinese internal affairs (Hong Kong, Taiwan, Xinjiang) and in the conflict over the South China Sea. It also accuses the government of conducting a discriminatory economic policy that dismisses investment projects for unfounded national security reasons, as well as undermining bilateral relations through accusations of Chinese cyber activities, funding think tanks with anti-Chinese research activities and adopting discriminatory measures targeting Chinese journalists or researchers.

Hiding behind sanitary or anti-dumping narratives, the Chinese authorities have taken a whole series of measures that targeted, in May 2020, products of Australian export such as barley, cotton, wine, beef, lobsters, but also coal, whose imports decreased from more than 9 million tons in May 2020 to 1.8 Mt in November. The overall cost of these disguised sanctions is still unknown, but the various Chinese measures, at this stage, involve an import volume worth more than $20 billion. This unprecedented and large-scale endeavor painfully underscores the Australian economy's dependence on China, which accounted for nearly 26% of its imports and 38% of its exports in 2019. Besides, there is no sign that China intends to put an end to these coercive measures quickly, nor indeed that others won’t be taken in the months ahead. Political relations remain tense and the virtual embargo on meetings between senior officials does not bode well for the normalization of the relationship in the short run. On the economic front, Chinese imports fell by 5.3% in 2020 and the Australian government calls for finding new market opportunities when, for its part, China manages to find alternative suppliers without difficulty. Ultimately, it helps to demonstrate that the Chinese economy isn’t affected in any way, but also that Australia's allies and partners can benefit from its woes.

Many observers have pointed out the negative and long-term consequences of this policy of economic coercion on China's image and soft power, as it has been observed in South Korea in recent years. There is no single explanation for this assertive, if not overtly aggressive, foreign policy; it is probably a mixture of domestic political considerations – flattering a skin-deep nationalism –, but also a deep feeling that China is powerful enough to adopt a direct or even aggressive tone (wolf warrior diplomacy), that “small” powers ought not to take sides in the historical confrontation between the two Great ones. Finally it may have been grounded on the belief that it is sometimes useful to “kill the chicken to scare the monkeys,” to make an example or “to teach a lesson,” which was a justification for China's military campaign against Vietnam in February-March 1979.

The Europeans need to learn the lessons of this Sino-Australian confrontation. Without aiming to be exhaustive, we offer three thereafter:

• If the European Union protects its member states, this cover is imperfect, as shown by the Chinese boycott of French products when China felt that France was interfering in Tibetan affairs and in the organization of the Olympic Games in 2008. Beijing is a master in the art of concealing its acts of bullying for reactions from the “Chinese people”, of for sanitary or anti-dumping measures, always in accordance with WTO rules. It naturally hinders how the authorities in the victim country can communicate about it, as well as the demonstrations of solidarity from its partners. To cope with this "hybrid" strategy, there does not seem to be any remedy other than increasing the existing exchanges between the partner countries in order to coordinate common responses.

• The hypothesis of coercive measures targeting a European country is not theoretical and the United Kingdom could be the next target, due to an accumulation of disputes concerning what Beijing considers its essential interests: the programmed exclusion of Chinese operators from the 5G market, forefront critical positions on Hong Kong and on the internment and forced labor of Uighurs, the implementation in January 31 of a program to grant passports to residents of Hong Kong (3 million would be eligible, which could lead to the departure of 120,000 residents in 2021 and the flight of more than $30 bn in capital). These decisions have been taken as Britain strengthens its commitment in the Indo-Pacific, in particular on the military level, as illustrated early this year with the deployment in the Far East of the carrier battle group around the aircraft carrier Queen Elizabeth. Beijing has already expressed, through the Global Timesnotably, that the British policy would not be without consequences, in particular on the proposed free trade agreement. It could even go further and take the form of punitive measures comparable to those implemented against Australia. Here, Brexit would eventually weaken the British position and the government's ambition for a Global Britain would be jeopardized. In such a case, the challenge would be to demonstrate the full solidarity of all Europeans with Great Britain, and not to be impressed or divided in a context where Europeans are elaborating a common Indo-Pacific strategy.

• While the health crisis has made Europeans aware of the vulnerability of their supply chains, China's political and strategic instrumentalization / weaponization of its economic and technological power should encourage the EU, but also its member states, to develop a comprehensive economic security strategy. Japan recently committed to adopt one, and a 2019 memo written by Jean Pisani-Ferry and Guntram Wolff for the HRVP invited Europeans to do the same to better strengthen European security, resilience and economic sovereignty.