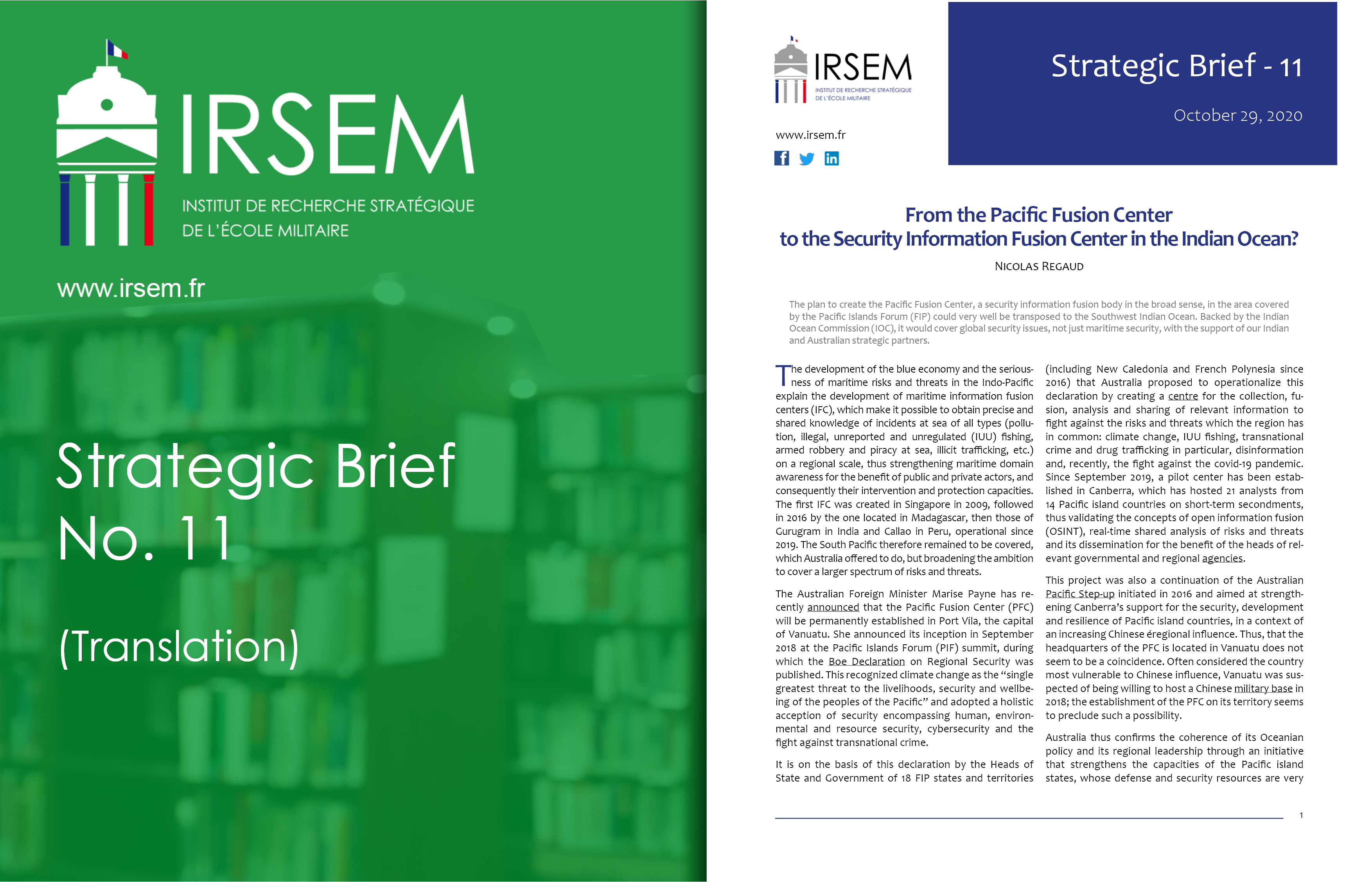 The plan to create the Pacific Fusion Center, a security information fusion body in the broad sense, in the area covered by the Pacific Islands Forum (FIP) could very well be transposed to the Southwest Indian Ocean. Backed by the Indian Ocean Commission (IOC), it would cover global security issues, not just maritime security, with the support of our Indian and Australian strategic partners.

The development of the blue economy and the seriousness of maritime risks and threats in the Indo-Pacific explain the development of maritime information fusion centers (IFC), which make it possible to obtain precise and shared knowledge of incidents at sea of ​​all types (pollution, illegal, unreported and unregulated (IUU) fishing, armed robbery and piracy at sea, illicit trafficking, etc.) on a regional scale, thus strengthening maritime domain awareness for the benefit of public and private actors, and consequently their intervention and protection capacities. The first IFC was created in Singapore in 2009, followed in 2016 by the one located in Madagascar, then those of Gurugram in India and Callao in Peru, operational since 2019. The South Pacific therefore remained to be covered, which Australia offered to do, but broadening the ambition to cover a larger spectrum of risks and threats.

The Australian Foreign Minister Marise Payne has recently announced that the Pacific Fusion Center (PFC) will be permanently established in Port Vila, the capital of Vanuatu. She announced its inception in September 2018 at the Pacific Islands Forum (PIF) summit, during which the Boe Declaration on Regional Security was published. This recognized climate change as the “single greatest threat to the livelihoods, security and wellbeing of the peoples of the Pacific” and adopted a holistic acception of security encompassing human, environmental and resource security, cybersecurity and the fight against transnational crime.

It is on the basis of this declaration by the Heads of State and Government of 18 FIP states and territories (including New Caledonia and French Polynesia since 2016) that Australia proposed to operationalize this declaration by creating a centre for the collection, fusion, analysis and sharing of relevant information to fight against the risks and threats which the region has in common: climate change, IUU fishing, transnational crime and drug trafficking in particular, disinformation and, recently, the fight against the covid-19 pandemic. Since September 2019, a pilot center has been established in Canberra, which has hosted 21 analysts from 14 Pacific island countries on short-term secondments, thus validating the concepts of open information fusion (OSINT), real-time shared analysis of risks and threats and its dissemination for the benefit of the heads of relevant governmental and regional agencies.

This project was also a continuation of the Australian Pacific Step-up initiated in 2016 and aimed at strengthening Canberra's support for the security, development and resilience of Pacific island countries, in a context of an increasing Chinese regional influence. Thus, that the headquarters of the PFC is located in Vanuatu does not seem to be a coincidence. Often considered the country most vulnerable to Chinese influence, Vanuatu was suspected of being willing to host a Chinese military base in 2018; the establishment of the PFC on its territory seems to preclude such a possibility.

Australia thus confirms the coherence of its Oceanian policy and its regional leadership through an initiative that strengthens the capacities of the Pacific island states, whose defense and security resources are very limited, particularly considering to the immensity of their area of ​​responsibility. The need to strengthen the resilience of states is identical in the Indian Ocean and the creation of the PFC raises the possibility of its transposition to the Southwest Indian Ocean.

There, the risks and threats are very similar to those facing the Pacific island countries. Climate change has tremendous effects on human security. In particular, there has been an intensification of extreme weather events in recent decades, as highlighted by studies conducted by France and Australia as part of the AFiniti program on the security implications of climate change in the Indian Ocean. A whole survey and analysis of the vulnerability of territories and critical infrastructures remain to be carried out at the regional level, offering a solid basis for an efficient prevention and protection policy.

Southwestern Indian Ocean countries are also the victim of rising illegal activities – IUU fishing, trafficking of drugs, humans and protected species… – both at sea and in the continental East African countries bordering the Mozambique Channel. Admittedly, thanks to the support of the European Union, a Regional Maritime Information Fusion Centre (RMIFC) was established in Madagascar in 2016, which allows the fusion of maritime information for the benefit of associated countries, currently the countries of the Indian Ocean Commission (IOC – Comoros, France / Reunion, Madagascar, Mauritius, Seychelles) and those who also deploy a liaison officer (Djibouti, Kenya and, soon, India). Backed by the IOC, CRFIM is gaining strength and establishing links with other regional centres, notably the IFC in Singapore, but it focuses on maritime security and is not intended to encompass all themes covered by the PFC.

, As part of the implementation of the French strategy in the Indo-Pacific, an initiative might be pondered to establish a Security Information Fusion Center in the Indian Ocean (SIFCIO), which could cover aspects that are not dealt with by RMIFC, or only partially, such as climate security, the fight against illicit trafficking of all types, disinformation, cybersecurity and health security.

This centre could – like the RMIFC and its armed wing, the Regional Coordination Operations Centre, RCOC – be backed by the IOC, a sub-regional organization that is admittedly modest but active and capable of carrying out concrete projects and whose governance and means of actions have been stepped up, in particular since the Council of Ministers in March 2020.

Such an initiative would require a feasibility study, such as Australia carried out with its PIF partners in 2018-19, which could this time be implemented jointly with India, Australia – France’s partners in the “Indo- Pacific axis” proposed by president Macron in his speech at Garden Island in May 2018 – and the IOC Secretary General. This study should specify the areas to be covered providing a real added value, in order to avoid the risk of creating an instrument which is intellectually attractive but of little use, such as the African Union’s Early Warning System. India would thus confirm its desire for engagement in the southwestern Indian Ocean, as evidenced by its new status as an IOC observer member since March and its plan to deploy a liaison officer to RMIFC. For its part, Australia is still hesitant to engage in the sub-region, but some encourage it, and in this case it could share its experience concerning the establishment of a multi-domain fusion center. The European Union could also be interested, as it is the first financial and technical partner of the IOC and an observer member since 2017, but also which supports and funds maritime security programs MASE and CRIMARIO, as well as the ENACT project on strengthening the fight against transnational organized crime in Africa.

The cost of such an initiative does not seem to constitute an insurmountable barrier if the Australian example is taken as a benchmark. Indeed, Canberra is devoting a budget of AU $ 11 million over three years (€ 6.5 million) to the establishment of the PFC, an amount likely to be borne by several partners for SIFCIO’s launching.

While the security situation is deteriorating sharply in Mozambique, which is likely to spill over into the security of the sub-region, while climate security is the subject of growing attention and proposals for the creation of a dedicated forum in the Indian Ocean, and while France intends to implement an ambitious strategy in the Indo-Pacific, a regional project for the fusion and analysis of multi-domain security information would be likely to strengthen the resilience of a region where France has multiple interests and must face growing challenges.