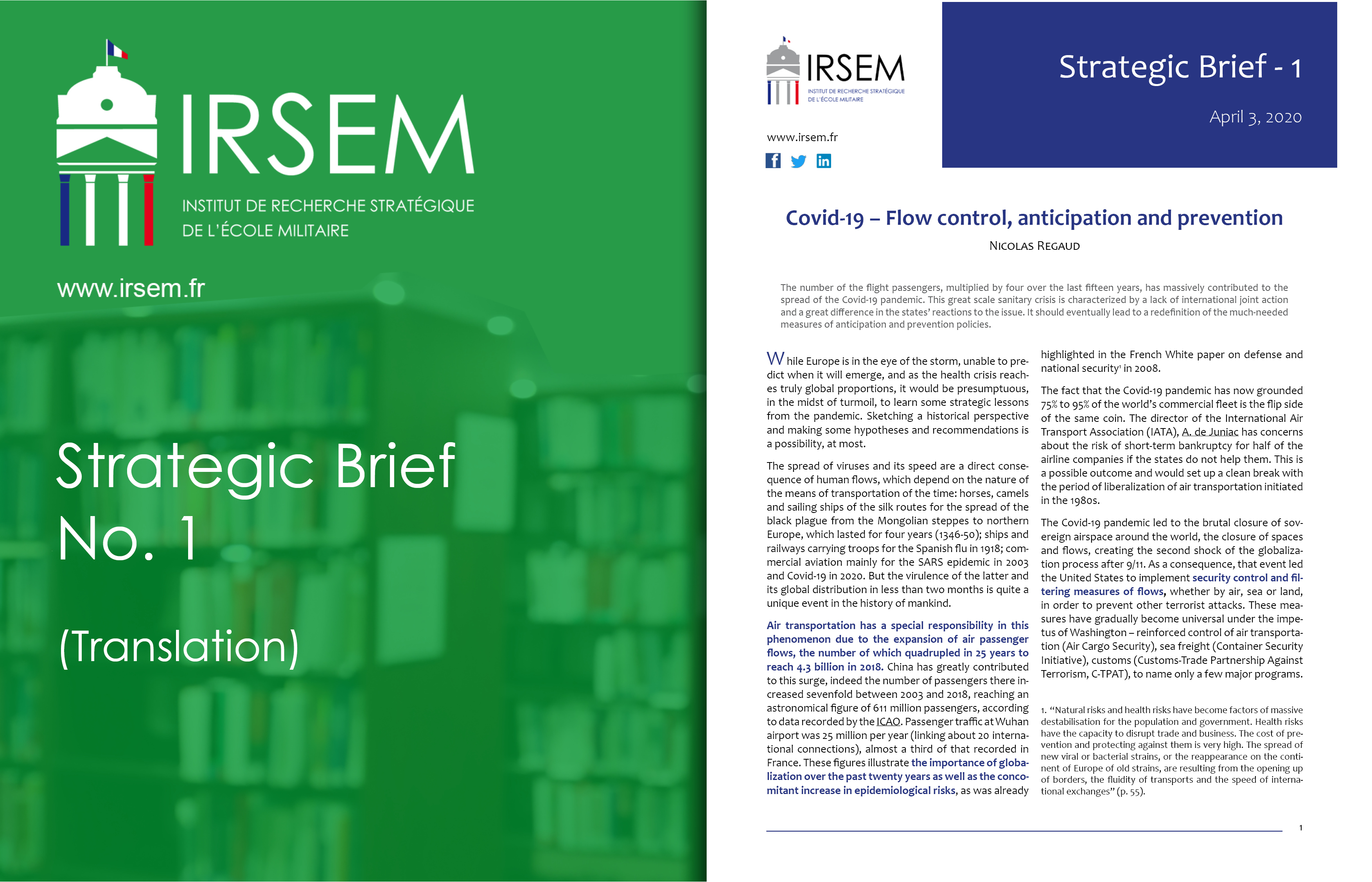 The number of the flight passengers, multiplied by four over the last fifteen years, has massively contributed to the spread of the Covid-19 pandemic. This great scale sanitary crisis is characterized by a lack of international joint action and a great difference in the states’ reactions to the issue. It should eventually lead to a redefinition of the much-needed measures of anticipation and prevention policies.

While Europe is in the eye of the storm, unable to predict when it will emerge, and as the health crisis reaches truly global proportions, it would be presumptuous, in the midst of turmoil, to learn some strategic lessons from the pandemic. Sketching a historical perspective and making some hypotheses and recommendations is a possibility, at most.

The spread of viruses and its speed are a direct consequence of human flows, which depend on the nature of the means of transportation of the time: horses, camels and sailing ships of the silk routes for the spread of the black plague from the Mongolian steppes to northern Europe, which lasted for four years (1346-50); ships and railways carrying troops for the Spanish flu in 1918; commercial aviation mainly for the SARS epidemic in 2003 and Covid-19 in 2020. But the virulence of the latter and its global distribution in less than two months is quite a unique event in the history of mankind.

Air transportation has a special responsibility in this phenomenon due to the expansion of air passenger flows, the number of which quadrupled in 25 years to reach 4.3 billion in 2018. China has greatly contributed to this surge, indeed the number of passengers there increased sevenfold between 2003 and 2018, reaching an astronomical figure of 611 million passengers, according to data recorded by the ICAO. Passenger traffic at Wuhan airport was 25 million per year (linking about 20 international connections), almost a third of that recorded in France. These figures illustrate the importance of globalization over the past twenty years as well as the inextricable increase in epidemiological risks, as was already highlighted in the French White paper on defense and national security[1] in 2008.

The fact that the Covid-19 pandemic has now grounded 75% to 95% of the world's commercial fleet is the flip side of the same coin. The director of the International Air Transport Association (IATA), A. de Juniac has concerns about the risk of short-term bankruptcy for half of the airline companies if the states do not help them. This is a possible outcome and would set up a clean break with the period of liberalization of air transportation initiated in the 1980s.

The Covid-19 pandemic led to the brutal closure of sovereign airspace around the world, the closure of spaces and flows, creating the second shock of the globalization process after 9/11. As a consequence, that event led the United States to implement security control and filtering measures of flows, whether by air, sea or land, in order to prevent other terrorist attacks. These measures have gradually become universal under the impetus of Washington - reinforced control of air transportation (Air Cargo Security), sea freight (Container Security Initiative), customs (Customs-Trade Partnership Against Terrorism, C-TPAT), to name only a few major programs.

The same might be used tomorrow at international airports around the world, where thermal cameras, digital thermometers and health checks are expected to be common law. The health crisis will undoubtedly lead States to reinforce the control of human flows. In the same way it is likely that sovereign states will express their strong will to relocate certain productions of goods which are essential to the health security of populations. The interdependence favored by globalization is now first perceived as a form of dependence contrary to sovereign interests.

It is yet premature to comment on the outcome of the pandemic, on globalization and power relations, suffice to say that it will not promote globalization, multilateralism and the easing of tensions between major powers. The diversity of national handling of the crisis and the great differences in terms of anticipation and implementation of preventive measures, certainly illustrate the lack or the poor international or regional coordination in tackling a global challenge. Conclusions will have to be drawn, as in the 2008 White Paper, the recommendations of which, in this regard remain relevant (see page 162).

As a matter of fact, the SARS epidemic in 2003 was not considered striking enough to convince most States to put in place early warning tools, precautionary measures in the preliminary stages of a large-scale sanitation crisis (control at airports, for example) and appropriate prevention policies (strategic stocks). Some states are the exception, in particular Singapore from which we have a lot to learn in terms of anticipation. Scenario planning and prospective tools were introduced in that country at the end of the 1990s.

The City-State quickly learned the lessons of the crisis, when hit hard by SARS (33 deaths), and concluded that it was possible to better anticipate the occurrence of strategic surprises of this nature, in particular by the systematic analysis of weak signals (monitoring of the local press in PRC, in particular for epidemic risks). In 2004, Singapore set up a program dedicated to strategic surprises (black swans) of all types (pandemic, terrorism, maritime security, economic and social risks...), the Risk Assessment and Horizon Scanning (RAHS) program. This program uses advanced techniques of modeling and processing of open sources, in particular weak signals, it connects administrations (about twenty agencies) with each other and makes them share their data and collaborate on scenarios and strategic analysis.

This culture of strategic foresight has a lot to do with the exemplary anticipation and responsiveness with which the Covid-19 pandemic was managed, as a recent detailed analysis by the Institut Montaigne highlighted.

But what also characterizes the Singaporean administration system is its ability to work over the long term in an inter-agency manner on a very large number of subjects, and in particular those related to national security. According to Patrick Nathan, one of the actors in the RAHS project, “Singapore has one of the most joined-up government in the world. There are coordinating ministers, coordinating secretariats, whole-of-government and anticipating approaches to complex issues such as national security, the population, climate change, social and economic policies, and infrastructure”. This is food for thought for most Western countries, that are limited by a short-term way of thinking and stuck in sectorized modes of organization in the administration, hence in silos.

Hopefully the current crisis will favor the return of anticipation and prevention for the States as well as the objective of a better inter-agency organization, which were central objectives of the White Paper on defense and national security of 2008. It is the only way to meet global challenges and respond to the strategic surprises linked to globalization, whether they are health, climate, economic or technological risks.

Peter Ho, who inspired the RAHS when he was Permanent Secretary (National Security & Intelligence Coordination) and who is a key figure in Singapore's prospective strategic thinking, also stressed the importance of resilience in the era of surprises and strategic shocks: “Resilience will be an increasingly important driver of competitive advantage in the future. In a world of growing volatility and uncertainty, our approach to policymaking needs to go beyond an emphasis on efficiency, towards building resilience”. This issue will undoubtedly be at the core of post-crisis thinking.

[1] .  “Natural risks and health risks have become factors of massive destabilisation for the population and government. Health risks have the capacity to disrupt trade and business. The cost of prevention and protecting against them is very high. The spread of new viral or bacterial strains, or the reappearance on the continent of Europe of old strains, are resulting from the opening up of borders, the fluidity of transports and the speed of international exchanges” (p. 55).